The Spanish Supreme Court in Madrid has detained five Catalan separatist leaders, including the latest candidate for regional president. They will be held without bail pending their trials. 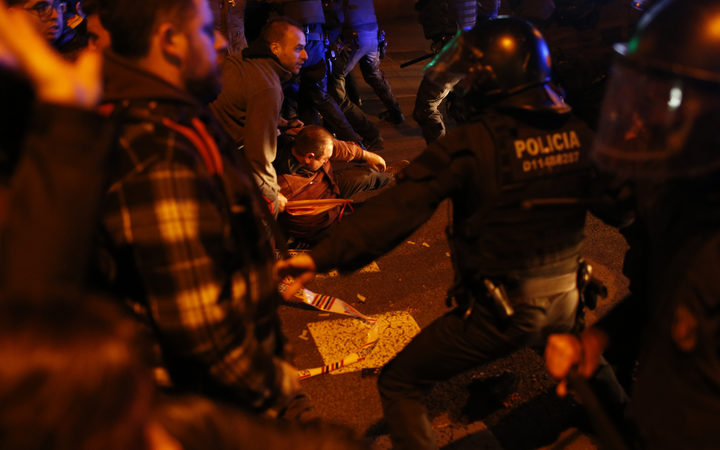 The leaders are charged with rebellion, along with eight others, over their involvement in a push for independence.

A judge said the five were serious flight risks.

Following the ruling, protesters clashed with police in the centre of Barcelona late on Friday.

The latest detentions throw into doubt a planned second vote in the Catalan parliament on Saturday on whether to install Jordi Turull, now in prison, as regional president.

Two separatist leaders wanted by the Spanish authorities are in self-imposed exile in Belgium and Switzerland.

Altogether 25 separatists have been charged variously with sedition, rebellion, embezzlement and other crimes. They deny all the allegations.

Who are the latest to be detained?

The five senior Catalan politicians remanded in custody on Friday were:

All five spent some time in detention following the banned referendum but were released on bail late last year pending investigations into their individual roles in the independence drive.

The Supreme Court Judge, Pablo Llarena, ruled on Friday that they should be returned to jail as they represented a flight risk.

The five join four other Catalan leaders already detained in prison. They include Oriol Junqueras, the former Catalan vice-president, and Jordi Sánchez, who was nominated to lead the Catalan government but dropped the bid after the Spanish authorities refused to release him to attend an investiture ceremony.

What else did the judge say?

Judge Llarena also issued an arrest warrant for Marta Rovira, the head of the separatist Esquerra Republicana party, who failed to appear in court on Friday.

Spanish media reported that she had fled into exile in Switzerland.

The judge also reactivated European arrests warrants for six others who are also in self-imposed exile, including former Catalan President Carles Puigdemont who is in Belgium.

The nationalist Catalan European Democratic Party (PDeCAT) condemned the court ruling and demanded the release of all those held in prison.

Later on Friday, thousands of protesters gathered in the centre of Barcelona, waving flags and condemning the actions of the Spanish government. Some parts of the crowd clashed with police and Spanish media report that more than 20 people were treated for minor injured.

A leadership vote for Mr Turull had been due to take place on Saturday.

Later on Friday, Catalan parliament speaker Roger Torrent said he would read a statement in support of those in prison in the parliamentary session.