The Turkish-backed Free Syrian Army have taken full control of the centre of the Syrian-Kurdish city of Afrin. 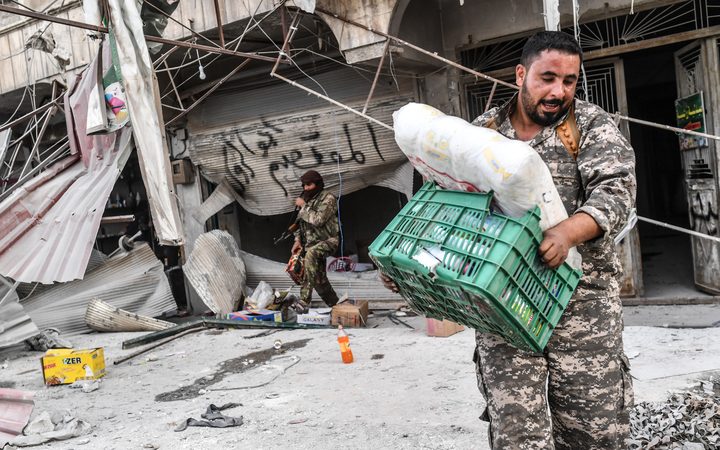 Fighters waved flags and tore down the statue of a legendary Kurdish figure after claiming the city centre on Sunday.

The two-month Turkish-led operation aimed to rid the border region of a Kurdish militia that Turkey considers a terrorist group.

Activists say 280 civilians have died, although this is denied by Ankara.

The Turkish assault on Afrin, named Operation Olive Branch, began on 20 January, with the aim of ridding the city and surrounding region of the YPG.

Turkey regards the YPG as an extension of the banned Kurdistan Workers' Party (PKK), which has fought for Kurdish autonomy in south-eastern Turkey for three decades.

The YPG denies any direct organisational links to the PKK - an assertion backed by the US, which is allied with the YPG in the battle against the jihadist group Islamic State (IS) in Syria.

Earlier, Turkish President Recep Tayyip Erdogan announced that "units of the Free Syrian Army ... took control of the centre of Afrin this morning".

"Most of the terrorists have already fled with tails between their legs," the Turkish president said.

"In the centre of Afrin, symbols of trust and stability are waving instead of rags of terrorists."

Pictures and video footage emerged of forces tearing down a Kurdish statue with a bulldozer.

The monument depicted the blacksmith Kawa, a legendary figure for Kurds.

A statement on a Whatsapp group for the Kurdish-dominated Syrian Democratic Forces called it the "first blatant violation of Kurdish people's culture and history since the takeover of Afrin".

Mohammad al-Hamadeen, spokesman for the Turkish-backed Free Syrian Army - a rebel group operating in the north of the country - said they met no resistance as they entered Afrin on three fronts.

"Maybe it will be cleared by the end of the day - it is empty of [YPG] fighters, they cleared out," he said.

Turkish military spokesman Bekir Bozdag said the campaign would continue until the area around Afrin was secure.

He said the YPG's "terrorism corridor" in Afrin was over.

However, in a televised statement, the co-chair of the Afrin executive council, Othman Sheikh Issa, said the war against Turkey had entered "a new stage".

Kurdish forces remained in the region and would "strike the positions of the Turkish enemy and its mercenaries at every opportunity", he said.

"Our forces all over Afrin will become a constant nightmare for them," he added.

The statement also said civilians had not fled, but were evacuated "to avoid a worse catastrophe".

US plans to help form a Kurdish border force set alarm bells ringing in Ankara, and prompted the launch of Operation Olive Branch.

President Erdogan vowed to "suffocate" what he called a "terror army."

Turkey also announced plans to push Kurdish forces from Manbij, another city near the border.