A former Nazi SS guard who was known as the "Bookkeeper of Auschwitz" has died aged 96, German media report. 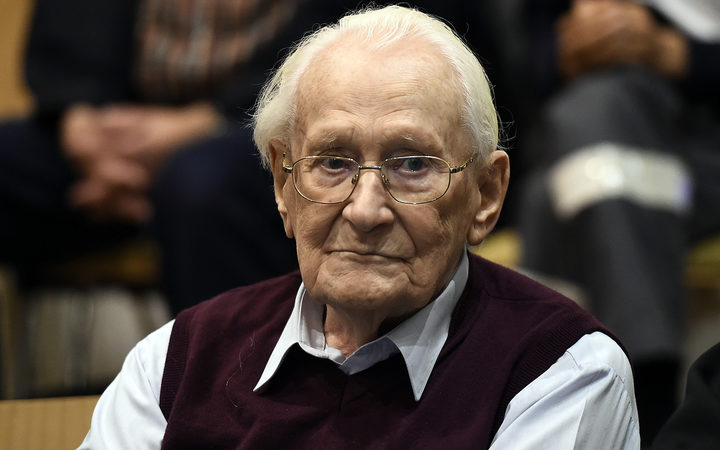 The former Nazi guard said he felt "moral guilt" for his actions at Auschwitz - but never served a day of his sentence. Photo: AFP

In 2015 Oskar Gröning was sentenced to four years' imprisonment, but never began his prison sentence due to a series of appeals.

He died in a hospital on Friday, according to Spiegel Online.

The pensioner was convicted of being an accessory to the murder of 300,000 Jews at the camp in Nazi-occupied Poland.

His job at Auschwitz was to itemise money and valuables taken from new arrivals, who were then killed or subjected to slave labour.

Though a court doctor found that he was fit for prison with appropriate medical supervision, his jail term was repeatedly delayed by ill-health and requests for clemency.

The former Nazi officer began work at Auschwitz at the age of 21. During his trial, he said he had witnessed mass killings, but denied any direct role in the genocide.

Addressing the judges, he said: "I ask for forgiveness. I share morally in the guilt - but whether I am guilty under criminal law, you will have to decide."

He was convicted although there was no evidence linking him to specific killings.

Presiding Judge Franz Kompisch said Gröning was part of the "machinery of death" that helped the camp function smoothly.

Gröning's trial was considered a landmark case for Germany, where many former SS officers have walked free because there was no evidence linking them to individual deaths.

Fewer than 50 of the estimated 6,500 Auschwitz guards who survived the war were ever convicted.

"Without at least symbolic justice, these trials - as important as they are - lose an important part of their significance," he said.

"Their victims never had any appeals, nor did their tormentors have any mercy. Consequently these perpetrators don't deserve either."

From bank clerk to Nazi

Gröning was born in 1921 in Lower Saxony in Germany, and his mother died when he was four.

His father was a proud nationalist, angry about the way Germany was treated under the peace settlement signed after World War One. That resentment increased when his textile business went bankrupt in 1929.

Gröning joined the Hitler Youth, and at 17 began training as a bank clerk. When war broke out, he wanted to follow in his grandfathers' footsteps and join an "elite" German army unit.

He signed up to the Waffen SS and arrived in Auschwitz in 1942.

When the war was over, Gröning slipped into a quiet life in Lüneburg Heath, Lower Saxony, where he worked in a glass-making factory.

Decades later, when he heard people denying the Holocaust had ever happened, he was moved to break his silence. He was one of very few former concentration camp guards to do so.

"I saw the gas chambers. I saw the crematoria," he told the BBC in the 2005 documentary Auschwitz: the Nazis and the "Final Solution".