US President Donald Trump and North Korean leader Kim Jong-un will meet by May and Mr Kim has pledged to refrain from further nuclear or missile tests, South Korea's national security chief said after briefing White House officials on talks between Seoul and Pyongyang. 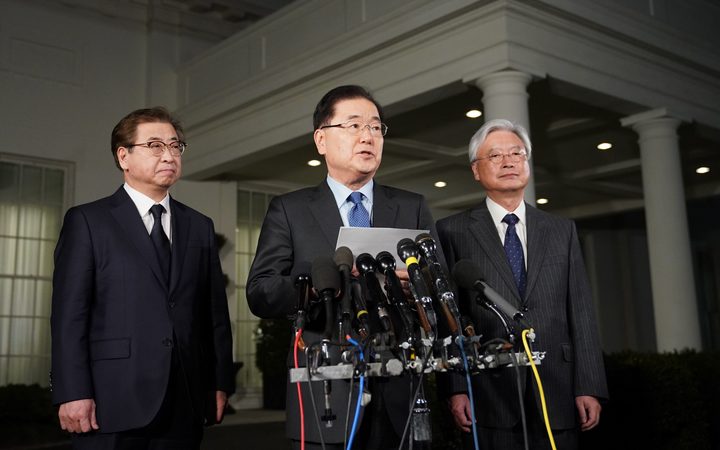 A meeting between Kim and Trump, who have exchanged bellicose insults in the past year that have raised fear of war, would mark a dramatic breakthrough in efforts to resolve the tense standoff over North Korea's effort to develop a nuclear-tipped missile capable of hitting the US mainland.

"I told him (Trump) that in our meeting that North Korean leader Kim Jong Un said that he's committed to denuclearization," Mr Chung said. "Kim pledged that North Korea will refrain from any further nuclear or missile tests."

"He expressed his eagerness to meet President Trump as soon as possible," he said. "President Trump appreciated the briefing and said he would meet Kim Jong Un by May to achieve denuclearization."

There was no immediate comment from the White House on the South Korean envoy's comments.

Trump's aides have been wary of North Korea's diplomatic overtures because of its history of reneging on international commitments.

Mr Chung and National Intelligence Service chief Suh Hoon flew to Washington earlier on Thursday to explain North Korea's stance on possible future talks with Washington and the prospect of Pyongyang suspending nuclear tests if the security of the North's government is assured.

Earlier Thursday, US Secretary of State Rex Tillerson said that though "talks about talks" might be possible with Pyongyang, denuclearization negotiations were likely a long way off.