Voting has now closed in Italy, in one of the most uncertain elections in living memory. 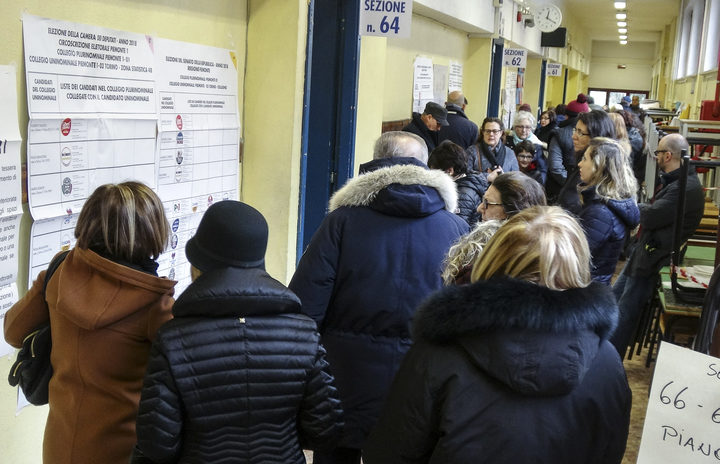 People line up to vote for general elections on March 4, 2018 at a polling station in Turin. Photo: AFP

Correspondents say it is hard to say who will come out on top.

Early exit polls suggest a hung parliament is likely, and that ex-PM Silvio Berlusconi's centre-right coalition is set to win the most seats.

The anti-establishment Five Star Movement is in second place according to the exit polls, and looks likely to be the largest single party.

The centre-right bloc includes Mr Berlusconi's Forza Italia (Go Italy!) party, the eurosceptic League, and Brothers of Italy. Initial projections suggest it will not get the absolute majority required to govern.

Mr Berlusconi, 81, cannot himself hold public office until next year due to a tax fraud conviction.

The four-time prime minister - who has allied himself with the anti-immigrant League party - has backed European Parliament President Antonio Tajani as his choice to lead the country.

Italy has seen a divisive election campaign dominated by concerns over immigration and the economy.

Officials at 7pm (7am NZDT) said that voter turnout stood at more than 58 percent, with several hours still to go.

Long queues were seen at voting centres around the country, with residents in Rome being asked to turn up well before polls closed at 11am (11pm NZDT) to make sure they had time to cast their ballot.

The delays are thought to have been caused by a new voting system and new in-depth, anti-fraud checks.

In Palermo, Sicily, 200,000 ballots had to be reprinted because of errors, which led to a delay in some polls opening.

More than 600,000 migrants have made the treacherous journey from Libya across the Mediterranean to reach Italy since 2013.

The huge number of arrivals has upset many Italians - with politicians, including from the mainstream, toughening their rhetoric as a result.

Mr Berlusconi has called the presence of illegal migrants a "social time-bomb" and pledges mass deportations.

The campaign has seen violent clashes between far-right supporters and anti-fascist protesters.

In 2016, some 18 million people were at risk of poverty, and unemployment is at 11 percent.

Economic policy has been a key battleground but observers say they have heard more from parties about pensioners than youths, which could be due to young voters' high vote abstention rates.

Why is this election important?

Italy is the EU's fourth-largest economy and the potential gains by populist and far-right parties is a major concern in some European capitals and in Brussels.

Contenders have lined up to blame EU budget rules for hampering economic recovery. Five Star and the League had promised to hold a referendum to leave the euro but dropped that rhetoric.