US President Donald Trump has stepped up his war of words over trade tariffs, threatening to "apply a tax" on imports of cars from the European Union. 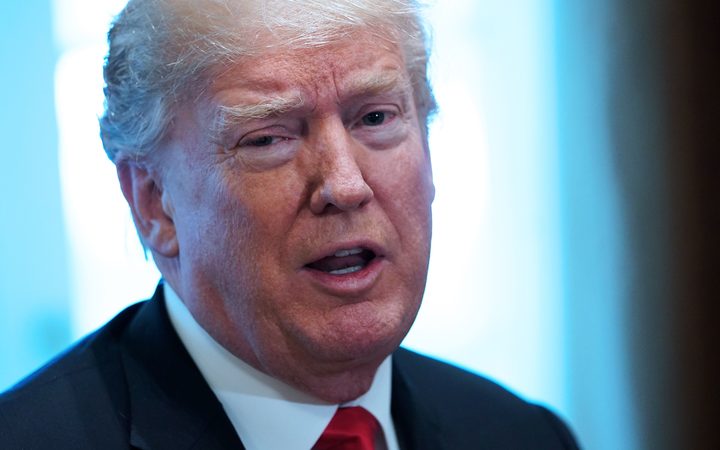 US President Donald Trump speaks on steel and aluminum tariffs during a meeting with industry leaders in the Cabinet Room of the White House. Photo: AFP

Mr Trump said other countries had taken advantage of the US for years because of its "very stupid" trade deals.

The trade wrangle began on Thursday when Mr Trump vowed to impose hefty tariffs on steel and aluminium imports.

That brought a stiff response from trading partners and criticism from the IMF and WTO.

EU trade chiefs have reportedly been considering slapping 25% tariffs on around $3.5bn (£2.5bn) of imports from the US, following Mr Trump's proposal of a 25% tariff on imported steel and 10% on aluminium.

What has Mr Trump said now?

In a tweet on Saturday, the president said: "If the EU wants to further increase their already massive tariffs and barriers on US companies doing business there, we will simply apply a Tax on their Cars which freely pour into the US.

"They make it impossible for our cars (and more) to sell there. Big trade imbalance!"

A second tweet decried the "$800 Billion Dollar Yearly Trade Deficit because of our 'very stupid' trade deals and policies".

Mr Trump added: "Our jobs and wealth are being given to other countries that have taken advantage of us for years. They laugh at what fools our leaders have been. No more!"

How many EU-made cars go to the US?

Germany is responsible for just over half of the EU's car exports, so new US tariffs would hurt the car industry there. But German carmakers also build hundreds of thousands of cars in the US every year - providing many US jobs that German officials say Mr Trump overlooks.

A number have questioned the wisdom of the tariff proposal and have been urging the president to reconsider.

Senator Orrin Hatch said: "I'm very surprised, he's had very bad advice from somebody down there. The people who are going to have to pay these tariffs are going to be the American citizens."

And industry bodies like the US Motor and Equipment Manufacturers Association have expressed deep concern, saying the benefits from the recent cuts in corporation tax "could all be for naught".

But Mr Trump's Commerce Secretary Wilbur Ross stood firmly behind the plans, saying the president was "fed up with the continued over-capacity, he's fed up with the subsidisation of exports to us".

Why does he want to impose tariffs?

It chimes with his "America First" policy and the narrative that the US is getting a raw deal in its trade relations with other countries.

Mr Trump tweeted on Friday that the US was "losing billions of dollars" and would find a trade war "easy to win".

When a country (USA) is losing many billions of dollars on trade with virtually every country it does business with, trade wars are good, and easy to win. Example, when we are down $100 billion with a certain country and they get cute, don’t trade anymore-we win big. It’s easy!

The president is using a clause in international trade rules which allows for tariffs for national security reasons.

But his move has not come totally out of the blue.

The commerce department recommended tariffs in February after conducting a review under rarely invoked national security regulations contained in a 1962 trade law.

What has the international response been?

The IMF said others could follow the US leader's precedent by claiming tough trade restrictions were needed to defend national security.

Canada said tariffs would cause disruption on both sides of the border. Prime Minister Justin Trudeau slammed the tariffs as "absolutely unacceptable".

He told reporters in Ontario he was "confident we're going to continue to be able to defend Canadian industry".

It is one of several countries, including Brazil, Mexico and Japan, that have said they will consider retaliatory steps if the president presses ahead with his plan next week.