Abuse, bizarre hazing rituals and misogyny are rampant at Australia's oldest and most prestigious university, according to a damning new report. 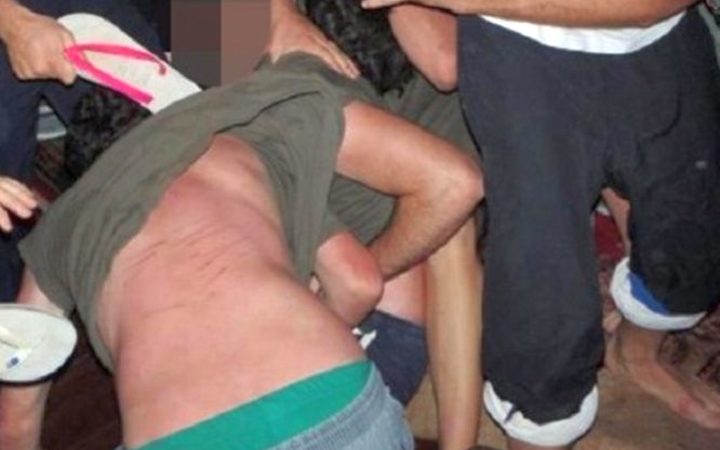 A student is beaten with rubber jandals during a hazing ritual at the university. Photo: Supplied / The Red Zone Report

The 200-page report, to be released today, lifts the lid on shocking rituals at the university, perpetrated by a clique of powerful older students on first-year students "for sexual and sadistic" purposes.

Report author Nina Funnell told the ABC the residential colleges' toxic culture hurt not only individual residents and students, but also the reputation of the university.

She is calling for hazing rituals at colleges to be criminalised.

Academic and gender equality advisor, Professor Catharine Lumby, said in the foreword of the report that it was meticulously researched and makes for "sickening reading".

She said she would not let her child live in a residential college - "not after reading this report".

The report is called The Red Zone, which refers to Orientation Week, a period when first-year students are most vulnerable to sexual assault, hazing and excessive alcohol consumption.

"While there have been dozens of attempts over the years to stop the abuse over this period, sexual assault and hazing activities have continued," Ms Funnell said.

"In recent years, students and parents have alleged that hazing has contributed to self-harm and actual suicide."

Calls for inquest into death

Those parents include prominent couple Ralph and Kathy Kelly. The Kellys lost their elder son, Thomas, in a one-punch attack in Sydney in 2012 and successfully campaigned for lockout laws to reduce alcohol-fuelled violence.

Tragically, their other son Stuart Kelly took his own life in 2016. The Kellys believe it was because he was hazed at St Paul's College earlier that year.

Mr Kelly said Stuart spent just one night at the college but was so traumatised by the experience he refused to go back. He said the morning after his first night on campus he called them in a distressed state.

"He called and said, 'You need to come and pick me up,'" Mr Kelly said.

"When we got there he had his head in his hands, sitting in the gutter and got into the car and just sobbed uncontrollably. So we just took him home."

Mr Kelly said his son spent the next two months in his room, only coming out to eat and shower. In July 2016, he took his own life.

The Kellys believe something "catastrophic" happened to Stuart at St Paul's, but say the college refused to investigate. They want a coronial inquest into his death.

And they are backing Ms Funnell's calls for hazing rituals to be banned and for a government-led task force to investigate the problem.

In a statement to ABC, the deputy head of St Paul's College, Geoff Lovell, said while the college had the deepest sympathy for the Kelly family, it had investigated the claims and found them to be unsubstantiated.

He said the college would continue to cooperate with investigations by New South Wales Police and the State Coroner.

He added that Orientation Week was not compulsory and denied there was a toxic culture of hazing at the college.

"The college is committed to the values of respect and dignity, including equality of respect for women and men, and actions inconsistent with these values are not tolerated," he said.

The ABC has spoken to two young women who experienced hazing and bullying over the past two years.

Gabbie Lynch is studying a Bachelor of Arts at Sydney University and lived at St John's College in 2016 and 2017.

Ms Lynch, 21, from Newcastle, said she was excited to be attending the country's most prestigious "sandstone" university.

But she was horrified by the rituals and excessive drinking that took place during Orientation Week.

"It was this insane week of partying and drinking and learning rituals, and the songs and the traditions that have been happening at the college for 100 years," she said.

"For me it was really frightening and overwhelming." 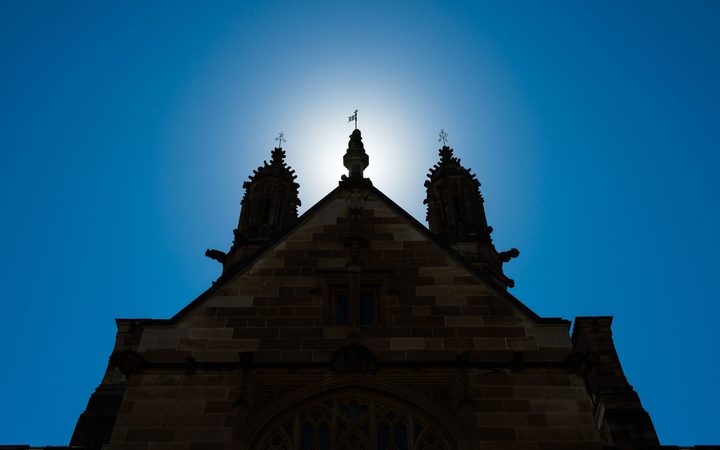 Ms Lynch said the first-year students, or "freshers", were forced to sit on the filthy floor of the college bar for hours on end while they were screamed at by older students and forced to skol alcohol.

"We were told we were the maggots at the bottom of the college and that we didn't deserve to be there and we had to prove ourselves," she said.

During Orientation Week, Ms Lynch said she woke up in the early hours of the morning after a heavy day and evening of drinking, to find three strange men in her room.

Ms Lynch said when she complained to the college she was told she should be "grateful" to have one of the better rooms at the college.

"I felt betrayed. It was almost like it was my fault that these guys have ended up in my room," she said.

'People were screaming and crying'

Later in 2016, Ms Lynch was involved in a disturbing ritual that involved more than 100 freshers being forced into a darkened room and having dead fish thrown over them.

"I couldn't believe this was happening. I wanted to get out so badly," Ms Lynch said.

"I was feeling really claustrophobic because my face was pushed up against other people's armpits and chairs, and people were screaming and crying, especially a lot of the girls. You could hear people crying. And then finally they let us out."

Ms Lynch said the culture at St John's was sexist and male students made a practice of running naked through the college and defecating in the hallways.

Another ritual, known as the Green Goblin, involved a group of male first-year students getting drunk, being stripped and painted green and then running through the college.

She said some green goblins kicked down a female student's door in 2016.

"These green goblins kick down the door and hit this girl in the face and cut her head, and she had to go to RPA Hospital and have it stitched up. I saw her injury and stitches."

Ms Lynch said she was asked to leave the college at the end of last year after she disclosed that she was suffering from anxiety and depression.

'I started to hate myself'

Ms Landis-Hanley, currently interning as a journalist in Japan, wrote an article for student newspaper Honi Soit about the rape of a young woman at St Andrew's College, and said the backlash was severe.

"People were not talking to me, people looked the other way when I said hi in the hallways, whole dining tables going completely silent when I'd sit down," she said.

"I expected this to come from the other colleges, but not the people who I had lived with. Not my friends."

She said a friend had decorated her bedroom door with a number of funny photos and screenshots.

"About a week after the article was published, I noticed they started to go missing. At first it was one a week and after mid-year break, every night, one disappeared. I realised it was a targeted action.

"It was the fact that somebody was trying to upset me and make me feel unwelcome in my own home that made me feel so worthless.

"I started to hate myself as much as I felt that they hated me.

"I came home and there was one photo on the door. I took it down myself, I went into my room I sat on the edge of my bed and I cut myself with a razor."

She was taken to hospital, but despite her obvious distress the harassment continued.

"It's indicative of what people fear about speaking out, when some of these hazing activities or behaviours they witness make them feel uncomfortable," she said.

She stressed that staff at Sancta Sophia College were supportive of her.

Ms Funnell told ABC that Ms Landis-Hanley's experience was a stark example of "what happens to college kids who rat on the college".

"It takes a huge amount of courage and bravery to speak up against these institutions."

Ms Funnell said she had spoken to dozens of students, many of whom were too afraid to be identified. She said some disclosed a particularly disturbing practice at St Andrew's College.

St Andrew's College told ABC it had not received any complaints about the alleged practice.

In a statement, it said it had not seen The Red Zone report or been approached by the report's authors to verify claims.

"Where incidents are brought to our attention, we are swift to investigate and firm in our response," the statement said.

The college said it had launched a number of initiatives aimed at creating a positive and safe environment for all students.

Ms Funnell said while the university had commissioned a review of the colleges in 2016, culminating in a 2017 report by former sex discrimination commissioner Elizabeth Broderick, she believed it did not go far enough.

"This is actually happening around the country in a range of institutions, and until we get some kind of outside intervention these places can't be trusted to regulate their own culture from within.

"It's a systemic problem that's going to require a systemic response".