US evangelist Billy Graham, one of the most influential preachers of the 20th Century, has died aged 99. 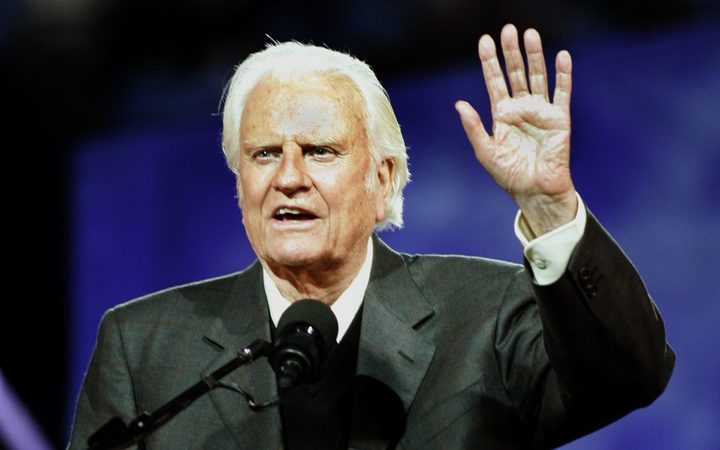 Mr Graham became one of the best-known promoters of Christianity, beginning his worldwide mission in large arenas in London in 1954.

He died at his home in Montreat, North Carolina, a spokesman for the Billy Graham Evangelistic Association said.

In a 60-year career, he is estimated to have preached to hundreds of millions of people.

Mr Graham reached millions of them through TV - the first to use the medium to convey the Christian message on that scale.

Born in 1918 and raised on his family's dairy farm in Charlotte, North Carolina, Billy Graham became a committed Christian at the age of 16 after hearing a travelling evangelist.

Mr Graham's public profile was raised in the United States when he held a two-month ministry in a giant tent in Los Angeles in 1949.

His global mission took him to all corners of the world including Nigeria and communist North Korea.

An early sermon outside the US took place before 12,000 worshippers in 1954 in Haringay Arena, London.

At first ambivalent about the civil rights movement in the US, he became more sympathetic in the 1950s, preaching to racially integrated congregations.

Mr Graham avoided the scandals - sexual and financial - which dogged some contemporary televangelists through the decades.

A social conservative, he opposed same-sex marriage and abortion.

Mr Graham preached his final revival meeting in New York in 2005 at the age of 86.

As the end of his life approached, he said: "I know that soon my life will be over. I thank God for it, and for all He has given me in this life. But I look forward to Heaven."

'Plus side of history' - tributes

Reacting in a tweet, President Donald Trump called him a special man.

He wrote: "The GREAT Billy Graham is dead. There was nobody like him! He will be missed by Christians and all religions. A very special man."

Former President Barack Obama said he was a guide to millions of Americans.

The Archbishop of Canterbury, Justin Welby, tweeted that he was an example to generations of modern Christians.

Civil rights campaigner Rev Jesse Jackson was among others to pay tribute.

Blessed with length of years and service, Rev. Graham helped a lot of people against a backdrop of Southern culture. He's on the plus side of history. May his soul Rest In Peace.

Mr Graham was close to US presidents from Harry Truman, through Richard Nixon to Barack Obama.

He played golf with Gerald Ford and went on holiday with George H W Bush. The latter's son, George W Bush, credits him with restoring his faith in 2010.

Graham endorsed Nixon for the presidency but went on to criticise him over the Watergate scandal.

Mr Obama became the 12th president to meet Graham when he visited the preacher at his hilltop home in North Carolina in 2010.

Mr Graham later acknowledged that his closeness to power risked compromising his message.

"If I had to do it over again, I would also avoid any semblance of involvement in partisan politics.

"An evangelist is called to do one thing, and one thing only: to proclaim the Gospel."