A station hand has been fined $10,000 for fatally shooting a 5.2-metre crocodile near Rockhampton in central Queensland, Australia last year. 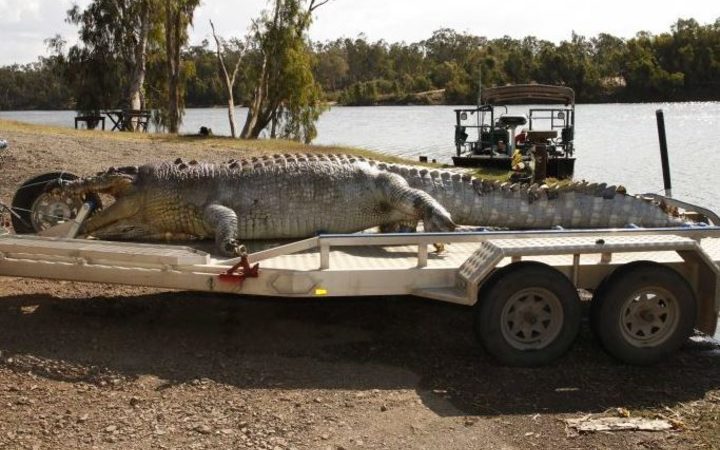 Orchard admitted to shooting the crocodile, saying it was taking calves and he was sick of it. Photo: Queensland Police Service

Luke Stephen Orchard, 31, pleaded guilty in the Rockhampton Magistrates Court but argued he was protecting cattle on his property when he shot the "iconic" crocodile last September.

Police prosecutor Jess King said experts estimated the crocodile was about 100-years-old, making it rare and of cultural significance to the region.

It had been shot between the eyes.

It is an offence to kill an estuarine crocodile without prior permission.

The penalty is higher for killing an "iconic" crocodile, which is an animal more than five metres in length.

The court heard Mr Orchard, employed at Belmont Research Station north of Rockhampton, was working when he spotted the crocodile on the bank.

Ms King said Mr Orchard told the police he believed he had hit the crocodile somewhere in the head area "as it did a few rolls and then disappeared into the water".

"He returned about four hours later to the same area where he saw the same crocodile with its head up on the edge of the bank," Ms King said.

"He told police he took a photo of the crocodile and sent it to his wife telling her that it wasn't dead and that he was going to go back with something a bit bigger to put a proper hole in it."

Defence lawyer, Rowan King, said the property stretched for 13 kilometres along the Fitzroy River and Mr Orchard believed the crocodile was taking cattle.

"It is the primary source of drinking water for the cattle that are in Mr Orchard's care," Mr King said.

The court heard the Department of Environment and Science had never received an official report of livestock being taken from the property.

'You knew it was a protected animal'

"You knew that it was a protected animal, you knew there was a process by which the presence of the animal on that property could have been reported to authorities," he said.

Mr Orchard was ordered to pay $10,000 and to forfeit the weapons used.

No conviction was recorded.

Outside court, Mr King said his client just wanted to move on.

"Mr Orchard has accepted the findings of the magistrate today and the penalty imposed," Mr King said on Friday.

"He is grateful for the professionalism of the arresting officers and the Queensland Police in this matter.

"He's expressed his remorse in court today and he's looking forward to moving on with his family in this matter."