The Irish government has agreed to hold a referendum at the end of May on whether to reform the country's near-total ban on abortion. 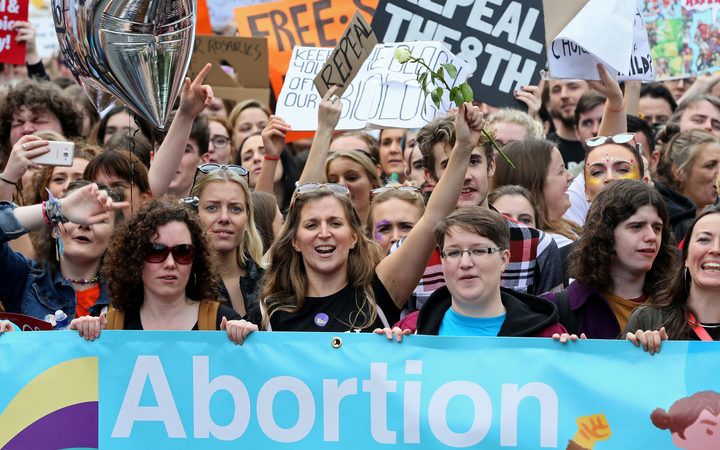 The vote will decide whether to repeal a constitutional amendment that effectively bans terminations.

Currently abortion is only allowed when a woman's life is at risk, but not in cases of rape, incest or fatal foetal abnormality.

Prime Minister Leo Varadkar has said that he will campaign for reform.

The ballot will not be on specific terms of any new law, but on whether to retain or repeal article 40.3.3 of the constitution, known as the Eighth Amendment.

The amendment, which was approved by a 1983 referendum, "acknowledges the right to life of the unborn" - meaning the life of the woman and her unborn child are seen as equal.

Before the vote the country's health minister will draft legislation proposing unrestricted abortion access be made available to women up to 12 weeks, and in exceptional circumstances after.

An exact date for the referendum will be decided after it is debated in the Irish parliament.

'Not black and white'

Campaigners have long called for the laws to be changed, and last year a special cross-party parliamentary committee and citizens assembly both recommended repealing the amendment.

"I know this will be a difficult decision for the Irish people to make," Mr Varadkar said.

"I know it is a very personal and private issue and for most of us it is not a black-and-white issue, it is one that is grey - the balance between the rights of a pregnant woman and the foetus or unborn."

Mr Varadkar, the country's former health minister, acknowledged that thousands of women in the country travelled every year for terminations or took pills ordered online at home.

In recent weeks many people, mainly men, have spoken about the personal journeys they have been on. We should remember the saddest & loneliest journey is made by Irish women who travel to other countries in their 1000s to end their pregnancies. These journeys don’t have to happen

He said the current law meant that abortions in Ireland were "unsafe, unregulated and illegal".

"These journeys do not have to happen, and that can change, and that's now in our hands," he said.

In 2016, 3265 women and girls gave Republic of Ireland addresses when accessing abortion services at clinics in England and Wales, according to UK Department of Health statistics.

"Every pregnancy is different, every decision is deeply personal. Women and girls in Ireland deserve their dignity. They deserve the right to privacy, family and home," said the group's director Orla O'Connor.

Abortion in the Republic of Ireland

The Republic of Ireland currently has a near total ban on abortion.

Terminations are not permitted in cases of rape or incest, or when there is a foetal abnormality and thousands of women travel abroad for a termination every year.

The eighth amendment to the Republic's constitution, introduced in 1983, "acknowledges the right to life of the unborn".

However, there have been significant challenges and changes to the law in recent years.

A campaign to liberalise abortion gathered momentum in 2012, after Indian woman Savita Halappanavar died in a Galway hospital after she was refused an abortion during a miscarriage.

The following year, legislation was passed to legalise abortion when doctors deem that a woman's life is at risk due to medical complications, or at risk of taking her life.

Twenty years before Mrs Halappanavar's death, a 14-year-old rape victim was initially prevented from travelling to England to terminate her pregnancy.

It became known as the X Case, as the girl could not be named to protect her right to anonymity.

The 1992 ban on travel was later overturned by the Irish Supreme Court.

A referendum approved a further update to the constitution, stating that the eighth amendment did not restrict the freedom to travel to another state.