A Pegasus Airlines flight skidded off the runway of a Turkish coastal airport and plunged down a steep slope on the edge of the Black Sea, ending up only metres from the water's edge. 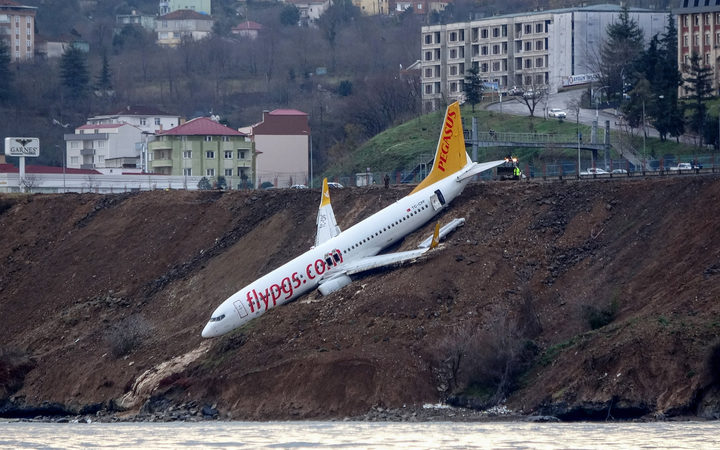 A Pegasus Airlines flight skidded off the runway of a Turkish coastal airport and plunged down a steep slope on the edge of the Black Sea. Photo: AFP

None of the 168 people on board was hurt in the incident, but passengers spoke of panic as the aircraft tipped nose first towards the sea.

Just after the flight from Ankara landed at the Black Sea city of Trabzon there was a loud noise, Fatma Gordu was quoted as saying by the state-run Anadolu news agency.

"We tilted on the side and the front of the plane went down and the back of went up," she said. "There was a huge panic, people were shouting."

When the plane came to a halt in thick mud, passengers smelt fuel.

"We thought there would be fire," Gordu said. "People panicked - there were pregnant women and children." 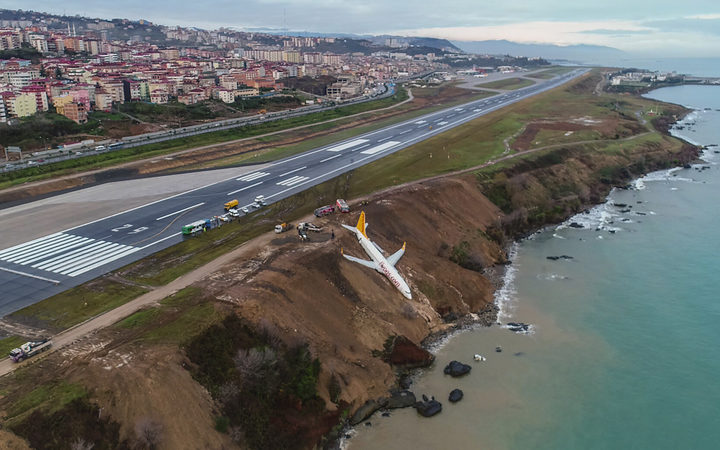 A Pegasus Airlines Boeing 737 passenger plane is seen stuck in mud on an embankment, a day after skidding off the airstrip, after landing at Trabzon's airport on the Black Sea coast on January 14, 2018. Photo: AFP

Trabzon governor Yucel Yavuz said all passengers were safely taken off the plane and some had gone to hospital as a precaution. "They were all OK," he told Anadolu.

Pegasus Airlines said in a statement that the Boeing 737-800 aircraft "had a runway excursion incident" as it landed but the 162 passengers, two pilots and four cabin crew were unhurt.