Residents and visitors in Hawaii have been recalling the shock of a false missile alarm, with many saying they thought they were going to die. 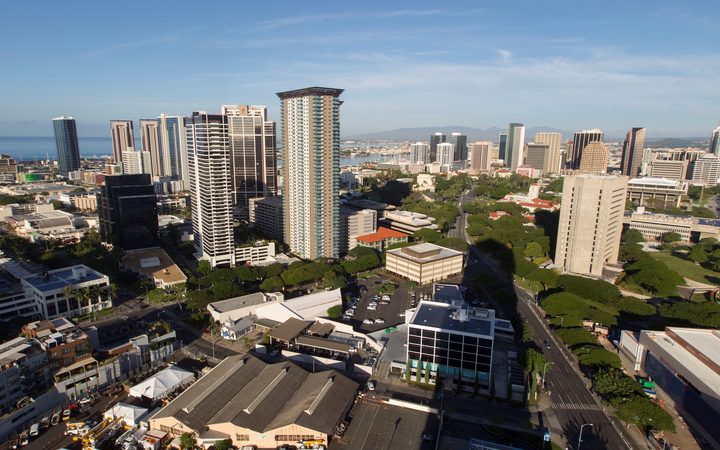 A morning view of the city of Honolulu, Hawaii on the morning a missile warning was sent out. Photo: AFP

The alert of an incoming ballistic missile was sent wrongly on Saturday morning by an emergency system worker.

Victims of the ordeal spoke of hysteria and panicked evacuations.

Are you a Kiwi holidaying in Hawaii? Send us an email: iwitness@radionz.co.nz

Why was the alert sent?

It was a mistake by an employee at Hawaii's Emergency Management Agency (EMA) who "pushed the wrong button" during procedures that occur during the handover of a shift.

The message was reportedly sent despite an onscreen prompt requesting confirmation.

Mobile phone users received the message at 8:07am local time (7am NZ time): "Ballistic missile threat inbound to Hawaii. Seek immediate shelter. This is not a drill."

The alert was corrected by email 18 minutes later but there was no follow-up mobile text for 38 minutes, the Honolulu Star-Advertiser reported.

The alert system is in place because of the potential proximity of Hawaii to North Korean missiles.

How did people react?

For some it was panic, a dash to a protective bathtub or hiding under manholes, contemplating what could be their last moments. For others, a resigned acceptance, thinking that staring at the beauty of Hawaii was not a bad way to go.

Hassan Deen, a student at Hawaii Pacific University, told the BBC the alert sparked a frenzy and he was locked for 47 minutes with 29 other students in a room with rubbish bins.

Emma Hine, who is visiting Hawaii from the UK, told the BBC: "It was one of the worst experiences because I actually thought we were going to die. I've got a daughter - Chloe - back home in the UK and I thought 'I'm not going to get a chance to say goodbye'. Everyone was genuinely terrified."

Her son, Lewis, a disability campaigner, suffered a seizure due to stress.

Marathon runner Lucja Leonard said she had heard of children being "pushed into drainpipes to get them protected".

"We all just huddled together and just thought - well, you know - if this is going to be the end I guess we're in a beautiful place, doing something we love but - God - it was pretty scary."

The false alarm also threw golfers at the PGA Tour's Sony Open at the Waialae Country Club into panic.

Steve Wheatcroft said "everyone is freaking out", although Justin Thomas was more laid back, saying: "I sat on my couch and opened up the sliding door and watched TV and listened to music. I was like, if it's my time, it's my time." 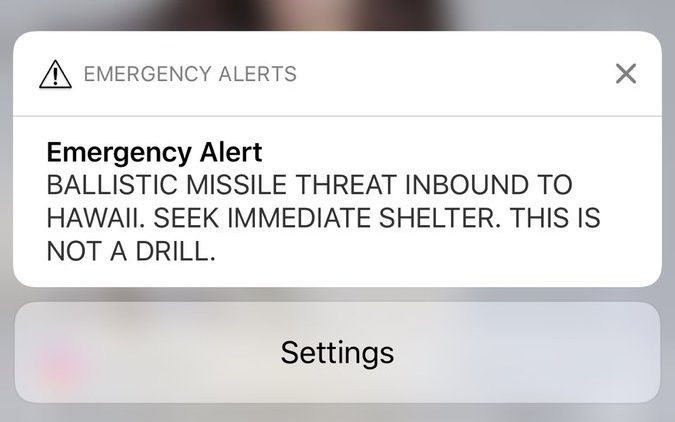 Hawaiians receive a text warning of a ballistic missile threat but officials later say it was a mistake. Photo: Twitter

What are the recriminations?

Governor David Ige said: "I am sorry for the pain and confusion it caused. I, too, am extremely upset about this."

A federal investigation has started in the state and officials said they would work to ensure such a false alarm never happened again.

Vern Miyagi, administrator of the Hawaii Emergency Management Agency, also apologised for the "inadvertent mistake" but said the threat was still there.

"If this comes out, you're going to have only 12 to 13 minutes of warning before the actual event and please take this to heart," he said.

The apologies didn't satisfy some. Democratic House Representative Tulsi Gabbard said: "Everyone in America needs to understand that if you had to go through this, you would be as angry as I am."

Brigette Namata, a television reporter in Honolulu, said it was "mind-boggling that we have officials here, we have state workers that are in charge of our public safety and a huge, egregious, mistake like this happened".

Has anything already been done to fix this?

One of the problems was that the alert system did not allow for a correction to be sent quickly to mobiles.

State officials said a "cancellation template" would be created to address the problem, the New York Times reported.

Two people are also now required to sign off the issuing of an alert, it said.

State lawmakers are going to hold a hearing next Friday.

Is the president under fire?

Unsurprisingly, his critics have rounded on him for his perceived lack of response or comment.

Actress Jamie Lee Curtis tweeted that the scare is "on YOU Mr Trump... Shame on your hate filled self".

Mr Trump's supporters have equally unsurprisingly defended him, pointing the blame at Hawaii and its Democratic government.

YourVoice America host Bill Mitchell tweeted: "So some dummy in Hawaii accidentally pushes the wrong button when Trump is playing golf and suddenly, 'Trump plays golf while we are under nuclear attack!' is the headline? I mean, c'mon."

The White House simply said Mr Trump had been briefed about the incident and called the alert "purely a state exercise".

His only tweet after the incident on Saturday was a general diatribe against "Fake News" and the "Mainstream Media", while on Sunday he addressed immigration and the economy.

Why was Hawaii already on edge?

North Korea's missile and nuclear programme is seen as a growing threat to America. Hawaii is one of the US states closest to North Korea.

In September Pyongyang carried out its sixth nuclear test.

Last month, the Star-Advertiser reported that a missile launched from North Korea could strike Hawaii within 20 minutes of launch.

So Hawaii has reintroduced Cold War-era warning sirens. During a test last month, it was reported that 93 percent of them worked properly, although some could hardly be heard and 12 played the ambulance siren.