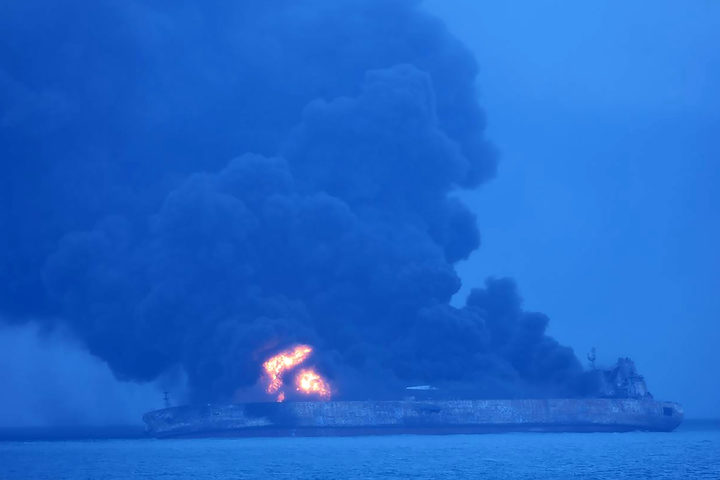 The collision took place some 296km off the coast near Shanghai. Photo: AFP / Korea Coast Guard

There are fears of an environmental disaster in the East China Sea as a tanker continues leaking oil two days after colliding with a cargo ship.

Chinese officials have told state media the Sanchi is in danger of exploding and sinking.

Rescuers trying to reach the burning tanker were beaten back by toxic clouds, the transport ministry says.

The body of one crewman, among the 30 Iranians and two Bangladeshis on board, has been found. The rest are missing.

The Panama-flagged Sanchi was bringing its cargo of oil from Iran to South Korea when it collided with the Hong Kong-registered freighter CF Crystal, carrying grain from the US, in the East China Sea. The incident occurred about 260km (160 miles) off the coast of Shanghai.

The collision, in the mouth of the Yangtze River Delta, occurred on Saturday evening.

The exact cause of the collision is not yet known.

Why is the Sanchi's oil so dangerous?

The tanker, run by Iran's leading oil shipping operator, has on board 136,000 tonnes of condensate, which is an ultra-light version of crude oil.

That is about one million barrels and at current prices is worth roughly $60m (£44m).

The Sanchi will also be carrying a certain amount of heavy - and toxic - shipping fuel.

Condensate is very different from the black crude that is often seen in oil spills.

It exists in gas form within high-pressure oil reservoirs and liquefies once extracted.

It is highly toxic, low in density and considerably more explosive than regular crude oil.

Condensate, which does not need the heavy refining process of denser crude, creates products such as jet fuel, petrol, diesel and heating fuel.

So is it bad for the environment?

Condensate is certainly toxic. It is both colour- and odour-less, and a lot harder to detect, contain and clean up than heavy crudes.

Simon Boxall, of the National Oceanography Centre at the University of Southampton, told the BBC there was another difference: "It's not like crude, which does break down under natural microbial action; this stuff actually kills the microbes that break the oil down."

It cannot be picked off the surface like heavy crude.

Dr Boxall said the best hope was to put out the fire and stop the ship from sinking.

"If she sinks with a lot of cargo intact, then you have a time bomb on the sea bed which will slowly release the condensate."

He added: "There could be a long-term exclusion of fishing for many hundreds of kilometres in this area."

How is the rescue going?

The Sanchi was still ablaze on Monday morning.

There are no signs of survivors among the 32-strong crew, although the 21 Chinese nationals on the grain freighter were rescued.

China has sent several ships to carry out search-and-rescue operations, while South Korea helped with a coast guard ship and a helicopter.

The US Navy also sent a military aircraft to help with the rescue efforts.

How does this compare with other oil spills?

It is impossible to say at this point because it is unknown how much oil has been, or will be, spilled.

The Sanchi's one million barrels is about 35 million gallons. Even if all of it spilled, it would be less than the major ship disasters listed below, but more than three times the Exxon Valdez spill in 1989, which is considered one of the world's worst environmental disasters.

So, how much the spill affects the environment depends on the location where it occurred. The Atlantic Empress incident listed below - the record spill from ships - saw little oil reach coastlines.

There are also a lot of different types of spill. Arguably the worst was the deliberate release of up to 500 million gallons by the Iraqis in January 1991 during the Gulf War. The resultant slick covered some 10,300 sq km (4,000 sq miles).

As far as ships are concerned: