A British CEO, his two sons, his fiancee and her 11-year-old daughter have been identified as the family who died when a seaplane returning from an upmarket restaurant dived into the Hawkesbury River, north of Sydney, on New Year's Eve. 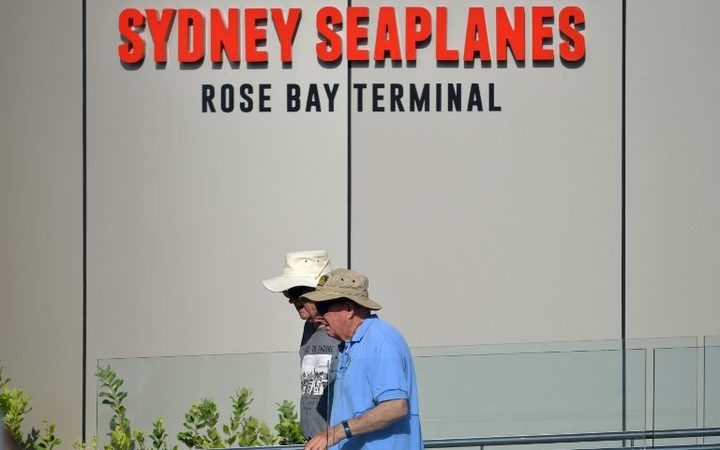 Visitors are seen at the entrance to the Sydney Seaplanes terminal in Rose Bay, Sydney on January 1, 2018. Photo: AFP or licensors

Six people - including Richard Cousins, the chief executive of catering giant Compass, his family and 44-year-old pilot Gareth Morgan - lost their lives when the aircraft, operated by the Sydney Seaplanes charter company, crashed into the river near the town of Cowan.

The crash was witnessed by many New Year's Eve revellers who were in the area picnicking on the riverbank, boating and fishing.

Mr Cousins was due to stand down as chief executive of Compass in March.

The 58-year-old had also served on the board of supermarket company Tesco, and was recently named as one of the world's best-performing CEOs by the Harvard Business Review.

The bodies were recovered yesterday but the wreckage of the plane is still submerged in about 13 metres of water.

Witness Todd Sellars was on a houseboat only 50 metres away and about to go wake-boarding with his friends when the seaplane "nosedived" into the water.

He told ABC Radio Melbourne he jumped into the water and tried to open the door of the submerged plane.

"I just thought it was coming in low doing a flyby, but when we looked out on the corner it just nosedived," he said.

Mr Sellars said he swam out to try and rescue the passengers but the plane sank too quickly.

"I ran my hands down through the windows but I couldn't open the door, it was sinking too fast," he said.

"The plane was pretty long so it was probably three or four metres under the water by the time we got down to the door."

Police are appealing for witnesses to the crash, including boaties who were at the scene, to come forward.

"This is people who have come over on holidays to visit Australia," he said.

"They were in one of the most beautiful parts of the world and for this to happen to them at a place like this is nothing more than just tragic."

"We are deeply shocked and saddened by this terrible news," Compass Group chairman Paul Walsh said in a statement.

"The thoughts of everyone at Compass are with Richard's family and friends, and we extend our deepest sympathies to them.

"It has been a great privilege to know Richard personally and to work with him for the last few years.

"Richard was known and respected for his great humanity and a no-nonsense style that transformed Compass into one of Britain's leading companies."

Mr Morgan was an experienced pilot with over 10,000 hours' flying time, 9,000 hours of which were in seaplanes.

Mr Shaw rang Mr Morgan's family in Canada today to inform them of the news and offer support.

"He was a lovely guy, a gentle guy, he was deeply liked by all of our staff and me personally," he said.

"We are all absolutely devastated at his loss. Ringing his parents today was obviously one of the worst calls that I have ever had to make in my life."

Mr Shaw said the weather conditions were benign at the time of the crash and the seaplane which went down was of a type which is widely used around the world.

"We had a flight that departed about 10 minutes before Gareth's flight, the pilot didn't report any untoward weather activities. It was about a 15 knot northerly wind which is perfect weather conditions. It was a lovely day," he said.

Mr Shaw said the company's first priority was safety for passengers and staff, and it had been operating since 2005 with an unblemished safety record.

Sydney Seaplanes has cancelled flights today and until further notice while the investigation takes place.