The Chinese army crackdown on the 1989 Tiananmen Square protests killed at least 10,000 people, according to newly-released UK documents. 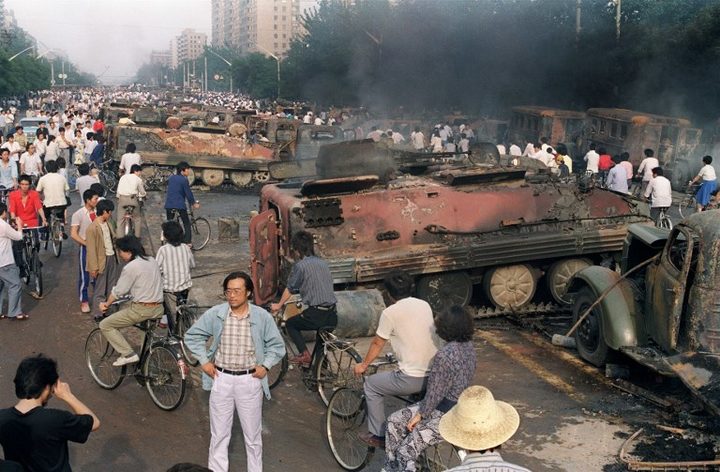 A file photo taken on 4 June, 1989 shows Beijing residents gathering around the smoking remains of over 20 armoured personnel carriers burnt by demonstrators during clashes with soldiers near Tiananmen Square. Photo: AFP

The figure was given in a secret diplomatic cable from then British ambassador to China, Alan Donald.

The original source was a friend of a member of China's State Council, the envoy says.

Previous estimates of the deaths in the pro-democracy protests ranged from several hundred to more than 1000.

China's statement at the end of June 1989 said that 200 civilians and several dozen security personnel had died in Beijing following the suppression of "counter-revolutionary riots" on 4 June 1989. 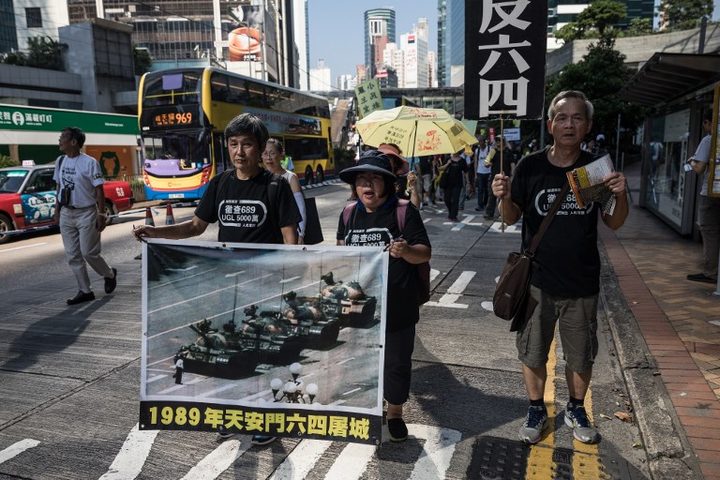 Protesters display a poster of the famous "Tank Man" standing in front of Chinese military tanks at Tiananmen Square in Beijing, during a rally in Hong Kong in May 2017, ahead of the 28th anniversary of the Tiananmen Square crackdown. Hong Kong is the only city in China to openly mark the anniversary. Photo: AFP / DALE DE LA REY

Mr Donald's telegram is from 5 June, and he says his source was someone who "was passing on information given him by a close friend who is currently a member of the State Council".

The council is effectively China's ruling cabinet and is chaired by the premier.

The cables are held at the UK National Archives in London and were declassified in October, when they were seen by the HK01 news site.

Mr Donald said the source had been reliable in the past "and was careful to separate fact from speculation and rumour".

The envoy wrote: "Students understood they were given one hour to leave square but after five minutes APCs attacked.

"Students linked arms but were mown down including soldiers. APCs then ran over bodies time and time again to make 'pie' and remains collected by bulldozer. Remains incinerated and then hosed down drains.

"Four wounded girl students begged for their lives but were bayoneted."

Mr Donald added that "some members of the State Council considered that civil war is imminent".

The political protest had lasted seven weeks before the army was sent in and it was the largest such demonstration in Communist China's history.

China bans all activists' commemorations and highly regulates online discussion of the incident, including censoring criticism. But it is marked annually by activists elsewhere in the world, particularly in Hong Kong and Taiwan.