Kidnapping suspect Nordahl Lelandais has been held since September, but French police now suspect him over a shooting that left a French cyclist and three Britons dead, and two girls traumatised. 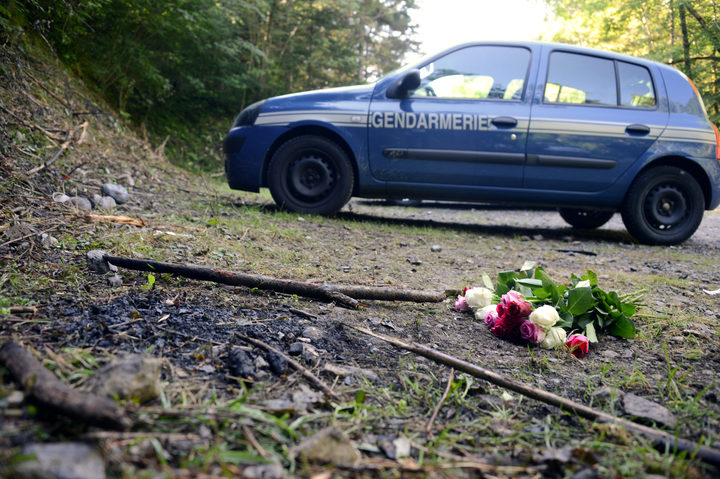 A bouquet of roses left at the scene three days after the bodies of Saad al-Hilli, Iqbal al-Hilli, Suhaila al-Allaf and Sylvain Mollier, in Chevaline in south-eastern France. Photo: AFP PHOTO / PHILIPPE DESMAZES

Saad al-Hilli, Iqbal al-Hilli, and her mother Suhaila al-Allaf from Surrey, south-east England, were found shot dead on a remote road in Chevaline, near Lake Annecy in south-eastern France on 5 September 2012, alongside a passing French cyclist, Sylvain Mollier.

The couple's two young daughters - aged four and seven at the time - survived the shooting. The younger girl was discovered hiding under her mother's body inside the family car, eight hours after the shooting, while her sister was found with serious head injuries after being shot and beaten.

Now, French police are questioning 34-year-old ex-soldier Nordahl Lelandais, who is the main suspect in the case of nine-year-old girl Maëlys de Araujo who disappeared in August in the Chambéry region of south-eastern France.

In custody since September, he has denied charges of kidnapping the girl.

"We are going to look at all the disturbing disappearances which have taken place in this region," Chambéry Prosecutor Thierry Dran told reporters, without specifying which cases would be reviewed.

However, the cases reportedly include the al-Hillis, as well as cases involving Adrien Mourial - a 24-year-old Belgian citizen who went missing near Lake Annecy in July - and Jean-Christophe Morin and Ahmed Hamad who vanished in 2011 and 2012 respectively.

Maëlys was last seen on 27 August in a children's area at a hall in Pont-de-Beauvoisin, 40km (25 miles) west of Chambéry, during a wedding in which Mr Lelandais was a guest.

Her parents say they did not know him, nor had they had any argument with him.

DNA of the girl was found on the dashboard of Mr Lelandais' car. According to his lawyer, he has admitted that Maëlys was in his vehicle on the night she disappeared but said that did not prove his guilt.

Mr Lelandais is also under investigation for the killing of 23-year-old soldier Arthur Noyer whose skull was found by a walker on 7 September in Montmelian, 16km from Chambéry.

The suspect admitted being in the area where Mr Noyer disappeared but denied any involvement in the killing.