Two men have been arrested after more than a dozen people, including a preschool-aged child, were injured when a car ran into pedestrians in central Melbourne. 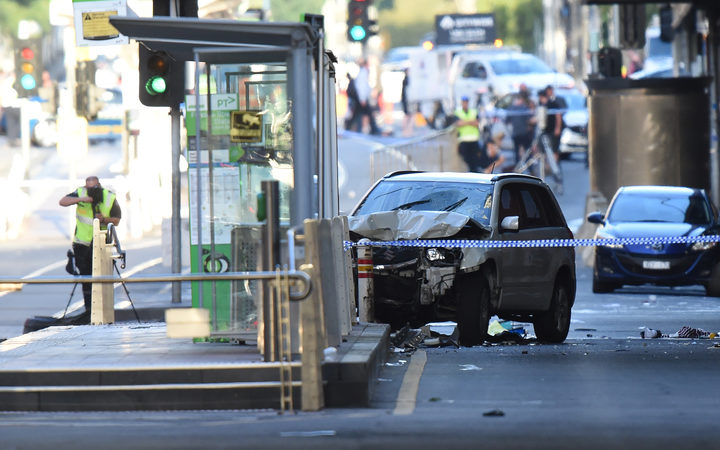 A white SUV sits in the middle of the secen after being driven into pedestrians Photo: AFP

Witnesses say they heard screams and saw bodies "thrown into the air" as the white SUV ploughed into pedestrians near Melbourne's Flinders Street Station.

"We believe based on what we have seen that it is a deliberate act. The motivations are unknown," Victoria Police Commander Russell Barrett said.

"We don't, at this time, have any evidence or intelligence to indicate a connection with terrorism," Mr Barrett said.

"We are treating this as a singular incident."

Two people, including the driver, were arrested at the scene.

The driver, a 32-year-old Australian citizen, was in the car alone. The second man arrested was observed filming the incident and had a bag with knives in it, police said.

The driver was known to police and had a history of mental health issues. He was being actively treated for a mental illness, Mr Barrett said. 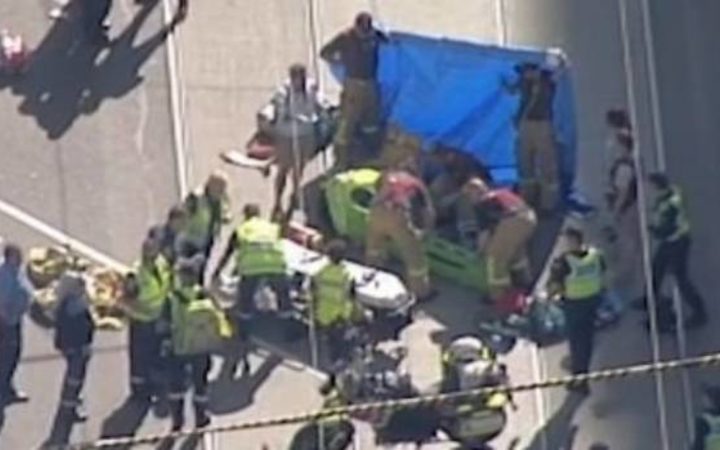 Multiple people have been injured, some seriously, after a vehicle plowed through pedestrians in central Melbourne. Photo: ABC NEWS

"I saw a car, a SUV coming at high speed and really just heard the collision with people with bags and what must be shopping trolleys - and I hope not prams."

"I've really never seen anything like this before and I haven't stopped shaking."

The 19 injured include a preschool-aged child with a head injury, who was taken to the Royal Children's Hospital in a serious condition. Four of those injured were in a critical condition.

“A lot of frightened people.”

Caller reports a SUV has ran through a pedestrian crossing in the CBD at the intersection of Flinders St and Elizabeth St.

The owner of a bakery on Flinders Street, identified as Jim, said the intersection was "full of pedestrians" when the car drove through it.

"He came to rest just next to the tram stop - maybe the side of the tram stop stopped him - but the only thing that seemed to be slowing him down was the amount of pedestrians he had hit.

Another witness, David, said the car appeared to be travelling between 60 and 100km/h.

"So it hit people in a fair speed and at least one or two of them got thrown pretty high into the air," he said.

Sarah, 18, and a friend said they got off a train at Flinders Street Station and saw people crying.

"It was scary because we didn't know what was going on," Sarah said.

"There were three groups of people surrounding them and there was blood and people crying and it was just very, very sad."

Police said they "saturated the CBD area in the vicinity of Flinders, Elizabeth and Swanston streets to ensure community safety".

Counsellors were also sent to the scene.

Mr Barrett said the crime scene would remain in place for a considerable time and he urged people to avoid the area.

He said people who had left vehicles or items inside the crime scene would not be able to retrieve them until it reopened.

"Police will continue to have a strong presence in the Melbourne CBD tonight," Mr Barrett said.

"We understand this has been a very traumatic event and there'll be witnesses, victims and family members affected." 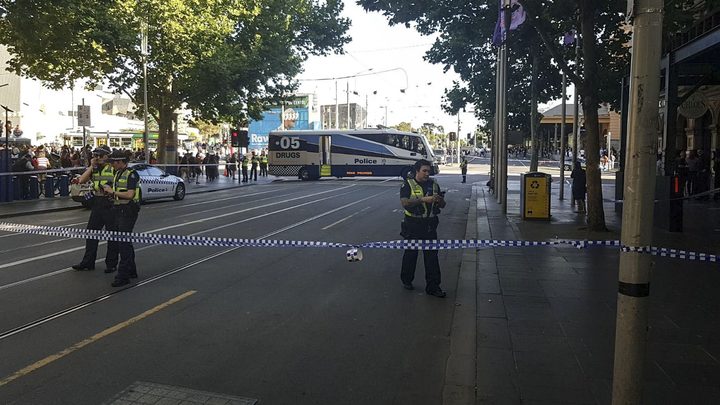 Melbourne has been on high alert for a pedestrian attack since a driver allegedly ran down pedestrians in the busy Bourke Street mall in January, killing six people.

The Victorian Government has since begun replacing them with permanent security features, such as planter boxes, as part of a $10 million CBD security upgrade.

In a tweet, Premier Daniel Andrews said there had been a "horrible incident".

"Stay safe. Check on your loved ones. And thank you to our brave emergency service," Mr Andrews wrote.

Police are appealing for any witnesses to attend the Melbourne West Police Station at 313 Spencer Street, Melbourne or contact Crime Stoppers on 1800 333 000.

They have also asked for anyone with video footage or images to upload them via the Police Evidence Submission Site.

Police are currently attending an incident on Flinders Street between Elizabeth and Swanston streets where a vehicle has collided with a number of pedestrians. Police have arrested the driver of the car. Extent of injuries are not known at this stage. (1/2)

Police are asking any witnesses to go to the Melbourne West Police Station at 313 Spencer Street, Melbourne and all vehicular and pedestrian traffic to avoid the area. (2/2)