To the untrained eye it does not look like much. 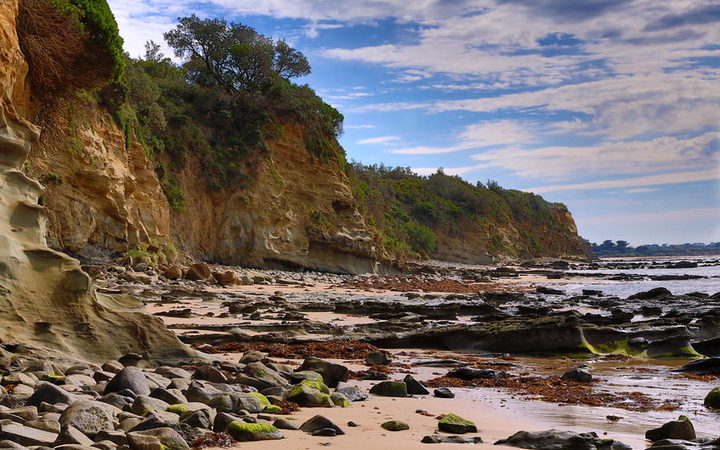 The rugged coastline at Inverloch was formed more than 100 million years ago. Photo: micut/123RF

But in the coastal rocks near Inverloch, southeast of Melbourne in Australia, a meat-eating dinosaur left its mark 115 million years ago.

The footprint, frozen in time in the Bunurong Marine Park at Flat Rocks, is recognised as a site of international significance.

But last month, park rangers discovered vandals had taken a hammer to the footprint at the Dinosaur Dreaming site, one of the few polar, or ice-age, dinosaur sites in the world.

"We took a school group out there and we noticed the deliberate damage," Parks Victoria ranger Brian Martin said.

When the dinosaur footprint was first discovered in 2006, palaeontologists from Museum Victoria and Monash University decided it should be left where it is so visitors could see it in its natural state.

They made a silicon rubber mould of the print.

"It is so disappointing. The footprint has been there for hundreds of thousands of years and it's a popular, significant site," Mr Martin said.

"For someone to damage it intentionally, you'd have to have a rough idea of where it is because seaweed grows on the rock platform and it looks like a normal rock until you look closely and see the outline of the footprint."

Broken pieces of the footprint have been retrieved from the tidal area.

"Hopefully technicians at Museum Victoria will be able to restore the footprint to some degree," Bunurong Environment Centre education officer Mike Cleeland said.

The type of dinosaur that left the print has not been identified.

Researchers have found evidence the area was roamed by at least six different types of carnivorous dinosaurs.

It has yielded more than 6000 bones and teeth of small dinosaurs, mammals, birds, turtles and fish, according to Parks Victoria.