A man who threw acid across a packed London nightclub, injuring 22 people, has been jailed for 20 years. 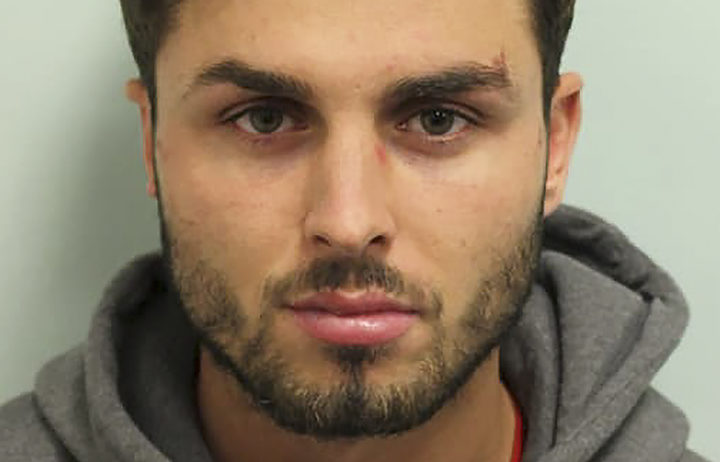 Arthur Collins, the ex-boyfriend of reality TV star Ferne McCann, threw the corrosive substance at revellers in Mangle E8 in Dalston on 17 April.

A total of 22 people were injured as a result of the attack, 16 of whom suffered serious burns. One man suffered third-degree chemical burns to the left side of the face and required a skin graft. Others had eye injuries.

The 25-year-old admitted throwing the liquid but had claimed he believed it was a date rape drug.

CCTV from inside the club shows Collins throwing acid at the men. Seemingly unaware of the mayhem caused, Collins returned to the dancefloor "drinking, dancing, Snapchatting and having a good time", the court heard.

Last month, he was found guilty of five counts of GBH with intent and nine counts of ABH. He was sentenced at Wood Green Crown Court to 20 years in prison with an extra five years on licence.

Judge Noel Lucas described the crime as a "despicable act".

"His defence from first to last was carefully researched and choreographed in order to explain away the evidence against him."

Collins, he added, had thrown the acid "irrespective of the persons on whom it landed" and said "his motivations for such a vicious course of conduct was nothing more than a perceived personal slight".

Addressing Collins, he said: "You knew precisely what strong acid would do to human skin.

"Having thrown the acid over the club you slunk away and hid in the rear and pretended to be nothing to do with the mayhem you had caused.

"It was deliberate and calculated and you were intent on causing really serious harm to your victims."

Collins was in the dock wearing a suit and showed no reaction as his sentence was read out.

The judge labelled him an "accomplished liar" and someone who has "not the slightest remorse for his actions".

However, Collins and his legal team have always denied any kind of gang-related activity, insisting that there was "not a shred of evidence" to support the theory.