With voting underway in Bennelong, Australia's political class is holding its breath over the result of the crucial by-election that could not only determine the future of the Government, but also the fate of its leader. 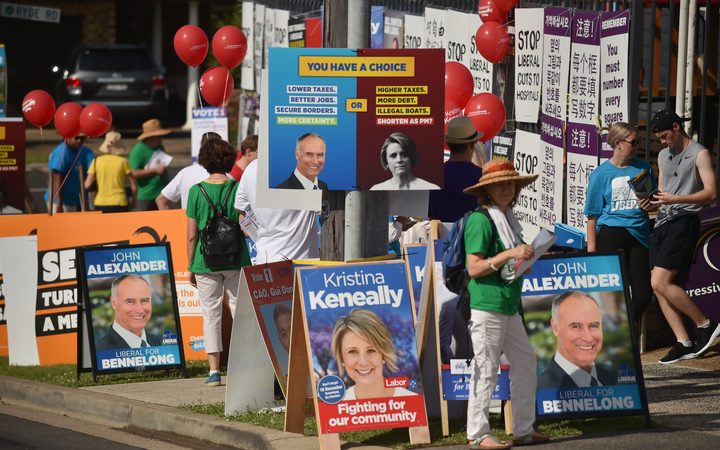 Banners and placards outside a polling station in the suburban seat of Bennelong in Sydney Photo: AFP

Polls indicate a tight contest in the ballot, with even Prime Minister Malcolm Turnbull conceding it will be close.

"People will be casting a judgment on the government, which I lead, of course," Mr Turnbull told Melbourne radio station 3AW.

"[Losing] would reduce the Government down to 75 seats out of 150 in the House of Representatives.

"It certainly brings Bill Shorten one seat closer to being Prime Minister."

Campaigning alongside Liberal candidate John Alexander this morning, Mr Turnbull made his final pitch to voters.

"Australia's security, prosperity, depends on John Alexander being back as part of our government, delivering more than 1000 jobs a day," he said.

Asked whether he was feeling the pressure, Mr Alexander made a reference to his days as a professional tennis player, telling reporters: "I've had pressure before in big matches, I'm fine."

Party strategists from both sides believe the Liberal Party has a slight upper hand in the ethnically diverse electorat, but Labor is hoping to capitalise on dissatisfaction with the Coalition Government.

This morning, Labor candidate Kristina Keneally said she had been "energised" by the campaign and would continue fighting for every last vote until the polls close tonight.

"There has never been a more important vote, indeed, the people of Australia are looking at Bennelong and wishing they were having their chance to have a say on this Government," she said.

"The people of Bennelong know how important the vote is."

Mr Alexander quit Parliament last month amid the citizenship fiasco, worried he could be a British dual citizen.

His campaign has been hampered by allegations he delayed in revealing his constitutional concerns, and accusations the Coalition is running anti-China rhetoric in its attack on outgoing Labor senator Sam Dastyari.

The former tennis champ has also had to battle rumours he will retire at the next general election.

The opposition rolled out star candidate Ms Keneally in a bid to capitalise on the saga, however the Coalition has repeatedly attacked her record as premier of New South Wales.

The campaign has been dirty and personal, and the major parties have thrown masses of resources at the battle.