President Vladimir Putin has ordered the partial withdrawal of Russian troops from Syria during an unannounced visit there. 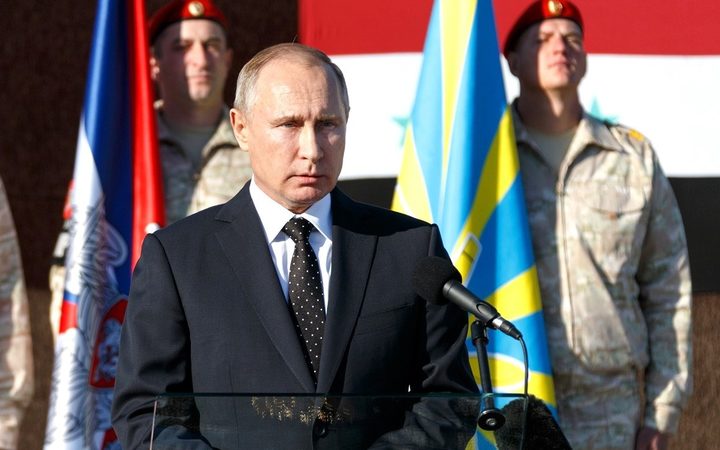 Mr Putin was met by Syrian President Bashar al-Assad as he arrived at the Russian Hmeimim airbase, near Latakia.

Russian military support has been crucial in turning the tide of Syria's civil war in Mr Assad's favour.

"I order the defence minister and the chief of the general staff to start withdrawing the Russian group of troops to their permanent bases," Mr Putin said on Tuesday, according to the Russian RIA Novosti news agency.

"I have taken a decision: a significant part of the Russian troop contingent located in Syria is returning home to Russia," he added.

Mr Putin said that if "terrorists raise their heads again", Russia would "carry out such strikes on them which they have never seen".

He told President Assad that Russia wanted to work with Iran, the government's other key ally, and Turkey, which backs the opposition, to help bring peace to Syria.

Russia launched an air campaign in Syria in September 2015 with the aim of "stabilising" Mr Assad's government after a series of defeats.

Officials in Moscow stressed that it would target only "terrorists", but activists said its strikes mainly hit mainstream rebel fighters and civilians.

The campaign has allowed pro-government forces to break the deadlock on several key battlefronts, most notably in Aleppo.

The Syrian and Russian air forces carried out daily air strikes on the rebel-held east of the city before it fell in December 2016, killing hundreds of people and destroying hospitals, schools and markets, according to UN human rights investigators.

Moscow has consistently denied that its air strikes have caused any civilian deaths.

However, the Syrian Observatory for Human Rights reported on Sunday that Russian air strikes had killed 6,328 civilians, including 1,537 children.

The UK-based monitoring group has documented the deaths of 346,612 people in total since the start of the uprising against Mr Assad in 2011.