A police officer charged with the murder of an unarmed man in the US state of Arizona has been found not guilty. 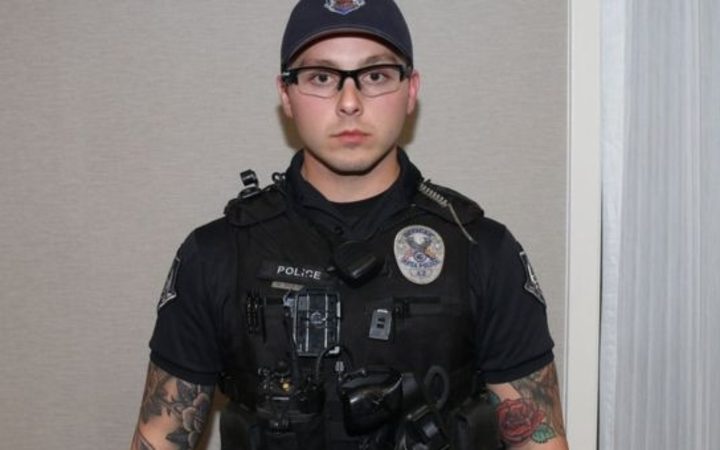 Philip Brailsford shot and killed 26-year-old Daniel Shaver in the hallway of a hotel in early 2016.

Bodycam footage of the incident, released after the verdict, showed Mr Shaver on his knees asking officers not to shoot him just before he was killed.

Mr Brailsford was acquitted of murder and a lesser manslaughter charge.

Mr Shaver was shot five times with a semi-automatic rifle as he crawled towards the officers, sobbing.

Prosecutors argued that the officer had responded appropriately, according to his training, when Mr Shaver reached towards his waistband - because he believed there was a concealed firearm there.

'Do not make a mistake'

Mr Shaver was confronted by police responding to a report of a man pointing a gun out of his hotel room window in January 2016.

The police report said he showed guests in his hotel room a rifle he used for his pest control work.

It later emerged that the rifle was an airsoft or pellet gun, rather than a genuine firearm.

The report also noted that the three occupants of the room had been drinking together, though one man had left by the time police arrived.

Bodycam footage of the shooting was not released to the public until after the verdict.

In it, Mr Shaver can be seen exiting his room in front of armed officers, and immediately lies down on the ground.

"Listen to my instructions and do not make a mistake," he is told. There follows a series of instructions on how to move his arms and legs, which he seems unable to follow.

He is then told to push himself into a kneeling position, and while doing so, he puts his hands behind his back - resulting in shouts from police to put his hands in the air.

"You do that again, and we're shooting you," officers say.

Mr Shaver responds by saying: "Please don't shoot me... I'm trying to do what you tell me."

A sobbing Mr Shaver is then told to crawl toward the police, and while doing so, moves his hand towards his waist.

The initial police report said the movement was "a very similar motion to someone drawing a pistol".

But it also said that Mr Shaver's shorts had fallen around his legs, leaving his underwear exposed. His movement "was also consistent with attempting to pull his shorts up as they were falling off".

"No other purposes for this movement appear to be viable," it said.

No weapon was found on the body, but Mr Bailsford said he believed Mr Shaver was reaching for a weapon in his waistband.

Mr Brailsford told the court: "If this situation happened exactly as it did that time, I would have done the same thing," Arizona Central reported.

The Associated Press news agency reports that Mr Shaver's widow, Laney Sweet, shook her head when the verdict was read and left without speaking to reporters.

Both Ms Sweet and Mr Shaver's parents have filed wrongful-death lawsuits against the city of Mesa, it the agency said.