US senator Al Franken said he plans to quit "in the coming weeks" after string of sexual harassment allegations. 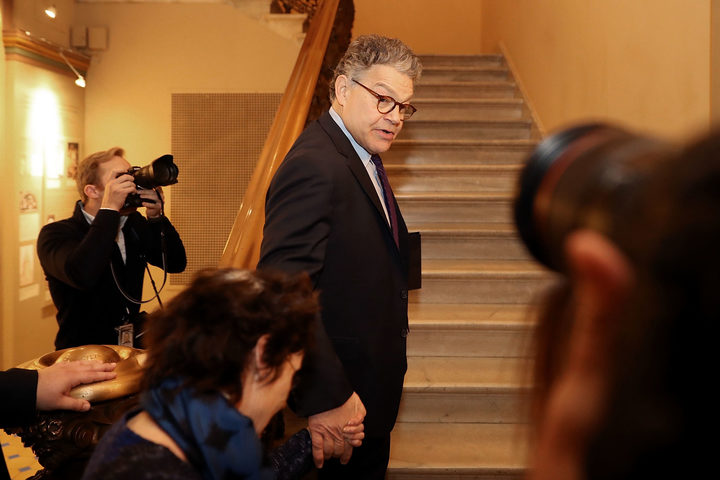 Al Franken announced his resignation a day after after dozens of Democrats called on him to resign. Photo: AFP

He announced his resignation a day after a majority of his Democratic Senate colleagues called for him to step down following a string of sexual misconduct allegations against him.

The Minnesota senator is the most prominent political figure to resign amid a wave of sexual misconduct allegations.

"I know in my heart that nothing I've done as a senator - nothing - has brought dishonor on this institution," Mr Franken said on the Senate floor. "Nevertheless, today I am announcing that in the coming weeks, I will be resigning as a member of the United States Senate."

"I may be resigning my seat but I am not giving up my voice."

The former Saturday Night Live comedian and two-term senator has apologised to several women who have accused him of groping and sexual harassment, but he faced mounting pressure to resign after a new allegation emerged on Wednesday.

"Some allegations against me simply are not true," he said adding "there has been a very different picture of me painted over the last couple of weeks".

"I am proud that during my time in the Senate that I have used my power to be a champion of women," the Democratic senator said from the US Senate floor.

The departure of the Minnesota Democrat presents an opening for Republicans to recapture a seat they lost when Mr Franken won election in 2008, and to build on their slim 52-48 Senate majority.

The election to succeed him, however, will not be held until November 2018. In the interim, Minnesota's Democratic governor, Mark Dayton, will appoint someone to take his place, ensuring Democrats hold the seat for now.

Allegations that Mr Franken had groped and tried to kiss women without their consent in the past began to surface three weeks ago.

After the initial accusations, Mr Franken said he was embarrassed and ashamed by his behavior but would not resign. Rather, he said, he would cooperate with a Senate ethics probe and work to regain the trust of the people of Minnesota.

However, a majority of his Democratic Senate colleagues, including most of the party's female lawmakers in the chamber, pressed him to step down on Wednesday after a new allegation hit the news.

Reuters has not independently verified the accusations against him.

In putting pressure on Mr Franken to step aside, Democrats have tried to capture the moral high ground and draw a distinction between their party and Republicans.

Democrat John Conyers, the longest serving member of the U.S. House of Representatives, stepped down on Tuesday after multiple accusations of sexual misconduct, the first member of Congress to leave his seat during the wave of high-profile harassment allegations. Mr Conyers has denied the allegations against him.

Republican Roy Moore, who is running for the Senate in Alabama and who faces numerous accusations of sexual misconduct or assault, has been backed by President Donald Trump ahead of a special election on Tuesday.

Senate Republicans, however, have been cooler toward the candidate, who denies the accusations against him.

The election to fill Mr Franken's seat next year could be a close fight.

When he ran in 2008, the race was decided after an extensive recount, with Minnesota's Supreme Court weighing in.

While Minnesota has been leaning Democratic lately, the party's 2016 presidential candidate, Hillary Clinton, won the state by less than two points.

Before he switched to politics, Mr Franken rose to national prominence as a cast member on the long-running television program Saturday Night Live.