Lebanese Prime Minister Saad Hariri has "suspended" his resignation, which sparked a crisis when he announced it while in Saudi Arabia two weeks ago. 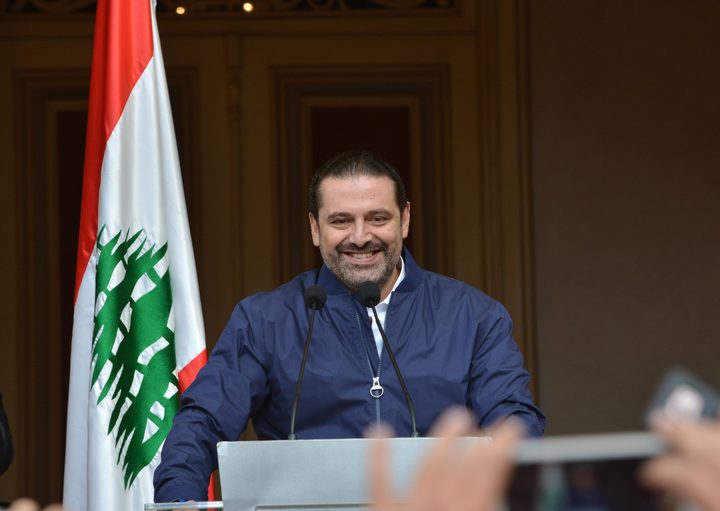 Lebanese Prime Minister Saad Hariri announced that he has put his resignation on hold. Photo: AFP

Mr Hariri said President Michel Aoun had asked him to "put it on hold ahead of further consultations".

The two men held talks a day after Mr Hariri flew back to Lebanon.

Mr Hariri has denied that Saudi Arabia forced him to resign and detained him in an attempt to curb the influence of Iran and its Lebanese proxy Hezbollah.

"Today I presented my resignation to his excellency the president, and he asked me to temporarily suspend submitting it and to put it on hold ahead of further consultations on the reasons for it," Mr Hariri said after Wednesday's meeting at the Baabda presidential palace.

"I expressed my agreement to this request, in the hope that it will form a serious basis for a responsible dialogue."

Mr Hariri said Lebanon required "exceptional effort from everyone" at this time in order to "protect it in confronting dangers and challenges".

He also reiterated the need to remain committed to Lebanon's state policy of "dissociation regarding wars, external struggles, regional disputes and everything that harms internal stability" - an apparent reference to the activities of Hezbollah.

The Shia Islamist movement acknowledges fighting alongside government forces in Syria and Iraq, and arming Palestinian militants. But it denies advising and sending weapons to rebel forces in Yemen's civil war and militants in Bahrain.

The fact that Saad Hariri's resignation has been delayed will be seen as a blow to Saudi Arabia. Many in the kingdom believe Riyadh pressured him to resign in order to bring about the Lebanese government's collapse.

Lebanon is now centre stage in the power struggle between Saudi Arabia and Iran. There is likely to be days of backroom dealing in order resolve this crisis. But the solution will need to involve the regional powers and the international community.

Significantly, Mr Hariri has opened the possibility that he may stay in power if Hezbollah respects Lebanon's policy of staying out of regional conflicts.

On Monday, Hezbollah's leader denied sending arms to Yemen and a number of other Arab states, and said he could pull its fighters out of Iraq once so-called Islamic State was defeated there.

But that is unlikely to appease a wounded Saudi Arabia.

Earlier on Wednesday, Mr Hariri was embraced by Mr Aoun as the two men attended an independence day military parade in Beirut. The president, a Maronite Christian former army commander and ally of Hezbollah who publicly accused Saudi Arabia of detaining the prime minister, appeared to tell him: "Welcome back!"

Mr Hariri left Riyadh for France at the weekend with his wife and one of his three children. He flew to Lebanon on Tuesday, stopping in Egypt and Cyprus en route.

On Monday, Hezbollah leader Hassan Nasrallah said in a speech that it still considered Mr Hariri prime minister and that the militant Shia Islamist movement was "open to any dialogue and any discussing that happens" in Lebanon.

Mr Hariri announced his resignation in a televised address on 4 November from Riyadh, in which he accused Iran of sowing "discord, devastation and destruction" in the region and said he sensed there was an assassination plot against him.

His father Rafik - himself a former prime minister - was killed in a car bombing in Beirut in 2005. Several members of Hezbollah are being tried in absentia at a UN-backed tribunal in connection with the attack, though the group denies any involvement.

Mr Hariri, a Sunni Muslim who became prime minister for the second time in late 2016 in a political compromise deal that also saw Mr Aoun elected president, has close ties to Saudi Arabia.

He holds both Lebanese and Saudi citizenship and has extensive business interests there. Riyadh also backs his political party, the Future Movement.