US President Donald Trump said he has a "great relationship" with Philippine counterpart Rodrigo Duterte, after a highly anticipated meeting in Manila. 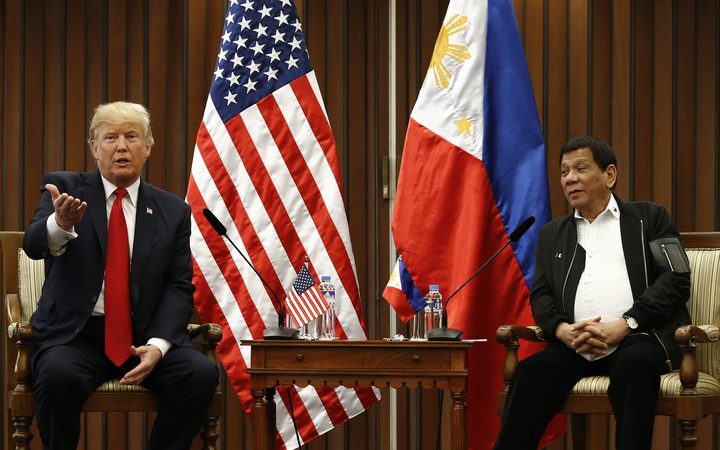 Donald Trump and Rodrigo Duterte hold a bilateral meeting on the sidelines of the ASEAN Summit at the Philippine International Convention Center in Manila. Photo: AFP

Mr Trump did not raise concerns about human rights violations in the country, despite calls for him to do so.

The previous US administration had spoken out against Mr Duterte's war on drugs, which has killed almost 4000 people.

Mr Trump is almost at the end of an extensive Asia tour.

The first meeting between Mr Trump and Mr Duterte, which took place at the Association of South-East Asian Nations (ASEAN) summit, was closely watched as both are known for striking a controversially outspoken and direct tone.

After the private meeting, the US president did not respond to questions about whether he had raised the subject of human rights while a spokesman for Mr Duterte said the topic had not been discussed.

Since coming into office in 2016, Mr Duterte has presided over a massive crackdown on crime in the Philippines, which critics allege undermines fundamental human rights.

He has encouraged extrajudicial killings of those involved in the drug trade, and said he would "be happy to slaughter" 3 million drug addicts in the country.

Police say they have killed almost 4000 people in anti-drug operations since 2016. More than 2000 others have been killed in connection with drug-related crimes.

Mr Trump and other leaders attending the ASEAN event had already met on Sunday evening at a gala in Manila ahead of the summit.

During the evening, Mr Duterte took to the stage to sing a Filipino hit love song, afterwards saying it had been "on the orders of the commander-in-chief of the United States".

Demonstrators took to the streets in Manila both on Sunday and Monday, protesting against Mr Trump's visit and carrying banners like "Trump Go Home" and "Ban Trump #1 terrorist".

Mr Trump's visit to the Philippines wraps up the US president's five-country trip to Asia which also had him visit Japan, South Korea, China and Vietnam.