Authorities in Papua New Guinea have started to dismantle makeshift shelters at the Manus Island detention centre, just hours ahead of the deadline for the men to leave or be forcibly removed. 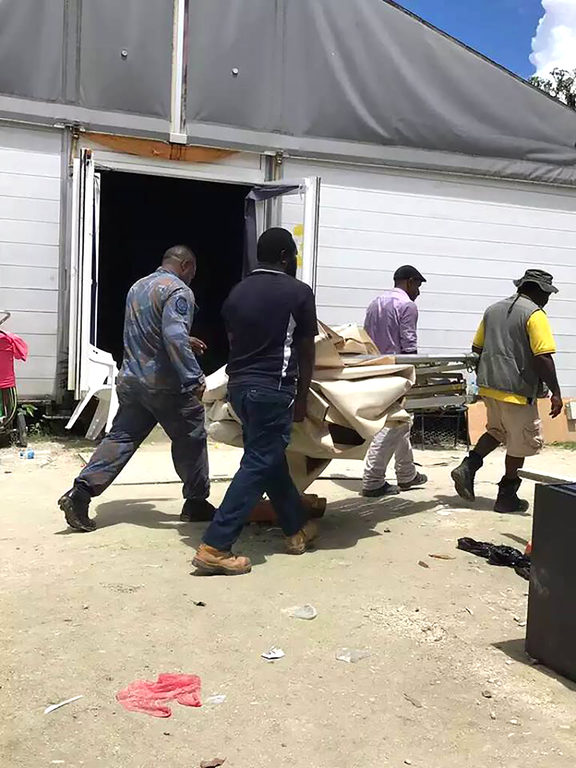 About 30 asylum seekers left the detention centre yesterday, but about 470 men remaining inside have vowed to stay put, setting the scene for a possible clash.

Local police authorities said around 130 men had left the detention centre over the last two days as authorities issued notices instructing holdouts to leave immediately because of "unhygienic conditions".

Despite the warning, several of the asylum seekers said on social media that they still would not leave the site as police began destroying rubbish bins the men were using to store water.

"They are destroying our shelters," Behrouz Boochani, a Kurdish journalist from Iran who has been detained for more than four years, said.

"They destroyed the rubbish bins where we have been collecting water too."

So many police mobile squad are around the prison camp. Refugees are still refusing to leave. Immigration is talking over microphone and saying you must leave.

UN calls for 'calm and restraint'

The UN Refugee Agency has urged PNG authorities to show "calm and restraint" ahead of today's deadline.

In a statement, it said the forced movement of asylum seekers was inappropriate and the situation at the detention centre required a "rapid de-escalation".

Volker Turk, assistant high commissioner for protection at UNHCR, called on both governments to exercise restraint and not to use violence, taking into account people who had been in the processing centre for years.

"These people are in a very vulnerable state with not much hope in sight," he said.

"We have been visiting Manus Island several times over the last couple of years, we have reported on the very dire conditions in these centres. It's now really high time to bring an end to this unconscionable human suffering."

Footage released this week by the activist group GetUp showed the squalid conditions inside the camp, where hundreds of men have been living without power, water or food supplies.

Meanwhile in Sydney, about 200 protesters picketed a Liberal Party fundraiser, heckling arriving guests and demanding that the men be allowed to settle in Australia.

Former prime minister Tony Abbott's sister, Sydney councillor Christine Forster, had her jacket ripped as she tried to enter a fundraiser surrounded by hundreds of protesters.

Cr Forster had to be helped through the crowds by police, who formed a human chain to shield guests from the several hundred protesters.

She said people had tried to "punch" her, and described the situation as "shocking" and "scary".

"It was a very unpleasant, unnecessary, dangerous situation that those people put everybody in," she said.