An image of two elephants fleeing a mob who set the animals alight has won a top wildlife photography competition. 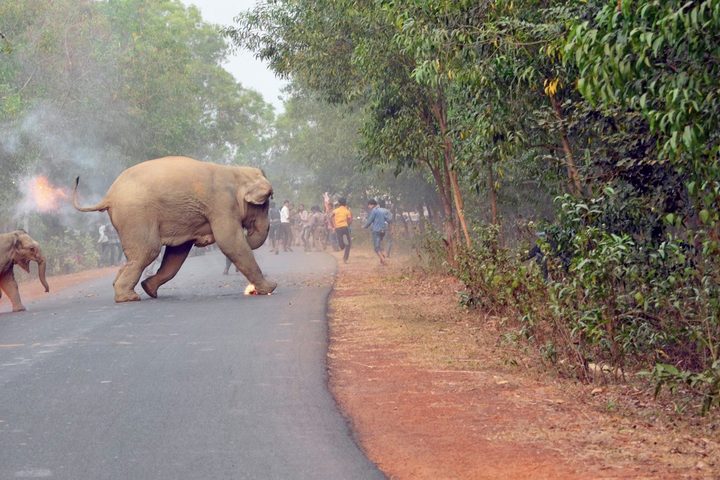 Biplab Hazra's picture shows a calf on fire as it and an adult run for their lives in eastern India after a mob threw burning balls of tar at the elephants.

The full version of the photograph can be viewed here and may distress some people.

Announcing the award, Sanctuary magazine said "this sort of humiliation... is routine".

The photo was taken in West Bengal, where human-elephant conflict is rife.

It's unclear what eventually happened to the two elephants in the award-winning picture, which was taken in Bankura district.

The district has often been in the news for human deaths caused by encounters with elephants.

The magazine's note accompanying the photograph explained that this was also a case of human-elephant conflict.

The note said a "crowd of jeering men" were flinging "flaming tar balls and crackers" at the two elephants when Biplab Hazra took the photograph.

He recalled the calf screaming in "confusion" as it fled.

"For these smart, gentle, social animals who have roamed the subcontinent for centuries, hell is now and here," he added.

The photograph has attracted a lot of attention on social media.

Mainak Mazumder, who lives in Bankura, commented that villagers were responsible for "heavy habitat destruction" and that "elephants have been subjected to terrible abuses and tortures".

But, he said, elephants also have "wreaked havoc" by destroying crops, damaging farmland, and have "killed innocent people".