Hundreds of thousands of supporters of a unified Spain have filled Barcelona's streets in a show of force against Catalan independence. 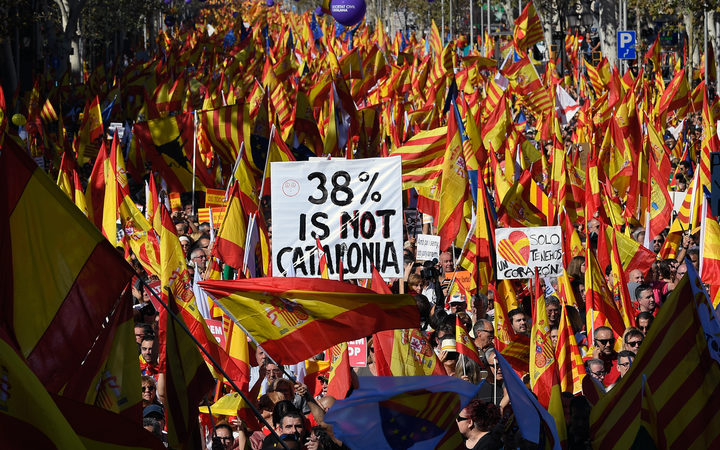 Protesters in Barcelona hold a sign reading '38% is not Catalonia' referring to voter turnout at a referendum on independence. Photo: AFP

Many of the protesters chanted that sacked Catalan leader Carles Puigdemont should be jailed.

Spain has been gripped by a constitutional crisis since a referendum, organised by Mr Puigdemont's separatist government, was held earlier this month in defiance of a ruling by the Constitutional Court which had declared it illegal.

The Catalan government said that of the 43 percent of potential voters who took part, 90 percent were in favour of independence.

The Guardia Urbana, a Catalan municipal police force, said at least 300,000 people had turned out in Barcelona. Organisers and the government in Madrid put the turnout a more than a million people.

Veteran Catalan politician Josep Borrell, a former president of the European Parliament, told demonstrators that Catalonia's former separatist leaders had no right to speak on behalf of the entire region.

Among the demonstrators was Marina Fernandez, a 19-year-old student, who said she was unhappy with the actions taken by the Catalan authorities.

"I am enraged about what they are doing to the country that my grandparents built," she told the AFP news agency.

Another protester, Maria Lopez, told Reuters: "What do we want? That they don't break us up. This is a disgrace. We are not going to consent. They are shameless, shameless, and Mr Puigdemont needs to be taken to prison."

On Friday the regional parliament declared independence and Madrid responded by declaring the move illegal.

Prime Minister Mariano Rajoy then announced the dissolution of the regional parliament and the removal of Mr Puigdemont as Catalan leader, and ordered that fresh regional elections should be held in December.

Mr Puigdemont has urged "democratic opposition" to direct rule from Madrid, which has said it would welcome his participation in the election.

A government spokesman in Madrid, Íñigo Méndez de Vigo, said Mr Puigdemont had the right to continue in politics, despite his removal from office.

"If Puigdemont takes part in these elections, he can exercise this democratic opposition," he said.

Belgium's Migration Minister Theo Francken told local TV on Sunday the separatist leader could be given asylum protection which Spain would find difficult to reverse.

There is no suggestion that Mr Puigdemont is seeking to leave Catalonia.

A poll published by Spanish national newspaper El Pais on Saturday suggested a small majority of Catalans (52 percent to 43 percent) were in favour of the dissolution of the regional parliament and the holding of elections. Fifty-five per cent of Catalan respondents opposed the declaration of independence, with 41 percent in favour.

Before Madrid took over the Catalan government, the region had one of the greatest levels of self-government in Spain.

It has its own parliament, police force and public broadcaster, as well as a government and president, though those have now been dismissed.

Catalans had a range of powers in many policy areas from culture and environment to communications, transportation, commerce and public safety.

Foreign affairs, the armed forces and fiscal policy were always the sole responsibility of the Spanish government.