A deadly strain of the plague has killed almost 100 people in Madagascar so far, authorities say. 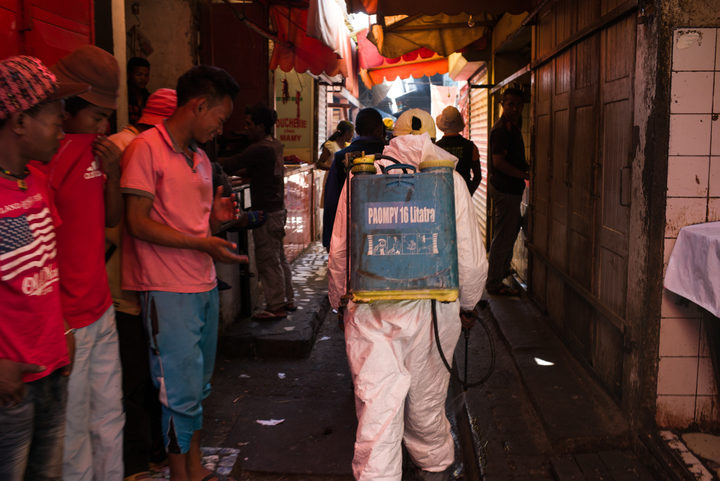 A deadly outbreak of the plague began in late August in Madagascar. Photo: AFP / RIJASOLO

It is the worst outbreak of plague in the island nation - which lies off the southeast coast of Africa and has a population of 24.9 million - this century. Usually, there are around 400 cases of mostly bubonic plague in the country annually.

While cases of bubonic plague occur in Madagascar nearly every year, this year's epidemic is "much more dangerous", secretary general of the International Federation of Red Cross and Red Crescent Societies (IFRC) Elhadj As Sy said.

Plague arrived earlier than expected this year and has become much more contagious as it is now being transmitted from person to person through the air in its pneumonic form, as well as from animals to humans through infected flea bites in its bubonic form.

The infection is also spreading in urban centres and in areas that until now had not been affected, the World Health Organisation (WHO) said this week.

Red Cross staff on the ground say panic is exacerbating the stigma around the plague, Mr Sy said.

"Our volunteers are working in communities convincing people to seek help."

The Red Cross is using burial practices that avoid contact with corpses, and deploying medical staff and equipment to help Madagascar tackle its worst outbreak of the plague this century.

The latest figures from Madagascar's health ministry show there have been 911 recorded cases of the plague across 17 of the island nation's regions since August, killing 97 people so far.

The number of cases was growing by the day, Mr Sy said, adding that the seriousness of the outbreak required "great vigilance."

The IFRC has introduced the same "safe and dignified" burial methods used in West Africa during the 2014-2016 Ebola epidemic, which are also being followed by the WHO and local government authorities to limit the spread of the plague.

Experience has shown such practices cut the chain of transmission by preventing further infections through direct contact with corpses, while enabling families and relatives to bury their dead in line with local customs.

Hospitals in Madagascar are on high alert and are implementing preventative measures such as limiting visitor numbers, medical staff said.

The IFRC, WHO and other international agencies are also providing ambulances to ensure patients with suspected cases do not spread the virus by taking crowded buses and taxis.

Mr Sy said building partnerships and trust at the community level was critical, as well as reinforcing an existing referral system for suspected cases.

But overcoming the plague will require longer-term assistance, he emphasised.

Plague is transmitted between animals and humans by infected fleas, direct contact with infected tissue or inhalation of infected respiratory droplets. It can be treated if detected early, but pneumonic plague is always fatal if untreated.

Plague has two main clinical forms - bubonic and pneumonic - and a third strain, septicaemic. The WHO says 584 people died from the disease between 2010 and 2015, when there were 3258 cases reported worldwide.

Pneumonic plague is rare and the most virulent strain, with an incubation period as short as 24 hours. Typically, the disease is caused by spreading to the lungs from advanced bubonic plague but anyone with pneumonic plague can transmit it via droplets in the air, from coughing or spluttering.