The police in Australia are offering a record $A6 million worth of rewards will help find a serial killer who has murdered six women. 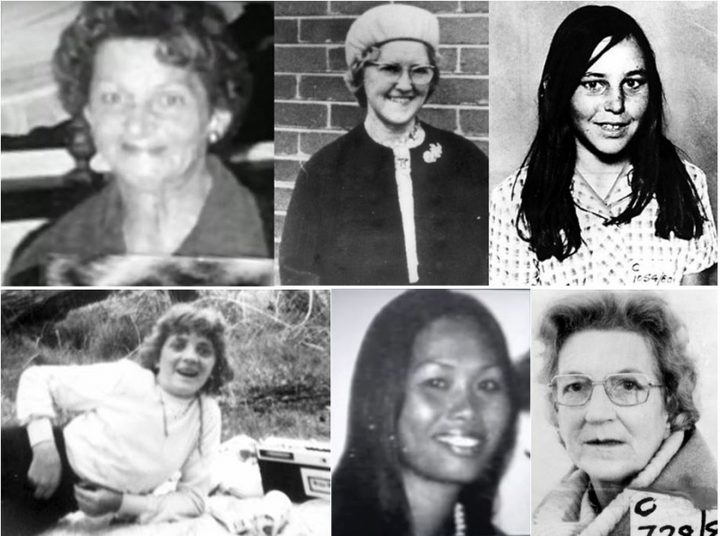 The six victims of a 1980s serial killer taken while walking around Frankston and Tynong North. Photo: Victoria Police

The loved ones of women who were murdered in a string of killings in the 1980s have spoken of their anguish, as Victoria Police offered the unprecedented rewards.

Police hope the six $A1 million rewards will help them find the person responsible for the murders of the women killed in what was known at the time as the Tynong North murders.

Police said all the women were on foot when they were taken, with the majority intending to take public transport.

Their bodies were found hidden in scrubland at Frankston, in bayside Melbourne, and at Tynong North, south-east of Melbourne, and the offender tried to hide their identities by taking their personal items.

Victoria Police Homicide Squad Detective Inspector Mick Hughes said police believed one of the victims, Bertha Miller, had been approached by a man at a tram who had noticed she was carrying a bible, two weeks before her death.

"She spoke to a friend after that and was pretty encouraged, she saw that as an opportunity to talk Christianity to that person," he said.

"We've never identified who that is, and we're working on the principle there's a good chance he is our offender.

"If we look at all of the victims, they've either been using public transport or close to, so he's clearly seen a way in to talk to Bertha, because everything I'm told about her, she wouldn't engage with people unless there was a reason to do so."

Keith Rooke, the son of Allison Rooke, who was the first of the women to fall victim to the killer, said bringing the killer to justice would help his family to talk about his mother.

"We've had a traumatic time and it's a sad way to lose our mum - a mother of six - and she was a great mum and now everyone's had to move on, it's a lot of time, but still we would love to see some finalisation," he said.

Ms Rooke was missing for more than two months before she was found.

"When eventually her body was found, because of the way the investigation has got to go, it tears families apart, it puts a lot of pressure on families and you have to make a very conscious effort to get over that, and move on," Mr Rooke said.

"It does terrible damage to families."

Police said they had spoken to more than 2000 people over the murders and a number of persons of interest were identified.

A new taskforce was established in 1998, but no-one has ever charged over the deaths.

The brother of Ann-Marie Sargent, Peter Sargent, praised the police for their continued efforts to bring the killer to justice.

"I think the police have done a great job, because they've not parked away and just forgotten about it, over the years it's brought up every now and again and they're still working on it," he said.

He said his sister was bubbly and loved kids, and despite all the years that had passed, the family had been "emotionally wrecked" by her death.

"Even now, we are hopeful that it will get solved … because the pain for us is really still there on a day-to-day basis in the background, but especially when we have events like Christmas and birthdays, we miss her being there.

'We thought we were safe'

Cheryl Goldsworthy, the best friend of 14-year-old victim Catherine Headland, said the loss of her friend, who she "idolised", changed her life.

"It changed us all … we thought we were safe. There was a group of us and we always stuck together, basically climbing over the back fences at night because you don't go out at night," she said.

"It shocked me and shocked us all. It still does. It dictated how I raised my children, and I know it also had the same effect on her other friends and their daughters.

She said she "truly believed" someone out there knew something about what happened to the women.