A Canadian held hostage by the Taliban has spoken of the group's "stupidity and evil", revealing they murdered his daughter and raped his wife. 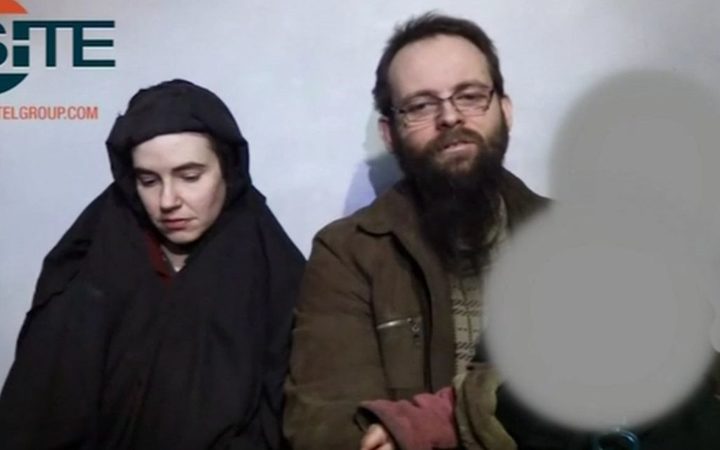 Joshua Boyle spoke to reporters after landing in Canada with his wife Caitlan Coleman and children following almost five years in captivity.

They were captured while reportedly backpacking in Afghanistan in 2012.

Ms Coleman's father has said the decision to visit the dangerous country was "unconscionable".

Both sets of parents have previously questioned why the couple were in Afghanistan in the first place.

"What I can say is taking your pregnant wife to a very dangerous place is to me and the kind of person I am, is unconscionable," Jim Coleman told ABC News following their rescue on Wednesday.

"I can't imagine doing that myself. But, I think that's all I want to say about that."

However, Mr Boyle told reporters at Toronto's Pearson International Airport the couple had been trying to deliver aid to villagers in a part of the Taliban-controlled region "where no NGO, no aid worker, and no government" had been able to reach when they were kidnapped.

Ms Coleman was heavily pregnant at the time with their first child. This week, they returned with three children, all born in captivity, the youngest of whom is understood to be in poor health.

In his statement, Mr Boyle appeared to suggest they had had a fourth child, a baby girl who had been killed by their captors, the Taliban-aligned Haqqani network, as he also revealed they had raped his wife.

It was, he said, "retaliation for my repeated refusal" to accept an offer made to him by the network.

"The stupidity and the evil of the Haqqani network in the kidnapping of a pilgrim... was eclipsed only by the stupidity and evil of authorizing the murder of my infant daughter," he said.

"And the stupidity and evil of the subsequent rape of my wife, not as a lone action, but by one guard, but assisted by the captain of the guard and supervised by the commandant."

The family were finally rescued by the Pakistani army after a US tip-off during an operation near the Afghan border.

Initial reports suggested Mr Boyle had refused to board a US military flight out of Pakistan.

Mr Boyle was once married to a woman who espoused radical Islamist views and is the sister of a former Guantanamo Bay inmate, Omar Khadr. CNN suggested he might fear prosecution by the US authorities.

But Mr Boyle rubbished the reports after arriving in Canada.

He said the family were looking to put their terrible ordeal behind them and the couple were now hoping "to build a secure sanctuary for our three surviving children to call a home".