British Prime Minister Theresa May's bid to reassert her dwindling authority has been marred by a calamitous keynote speech interrupted by repeated coughing fits, a prankster and even letters of her slogan falling off the stage. 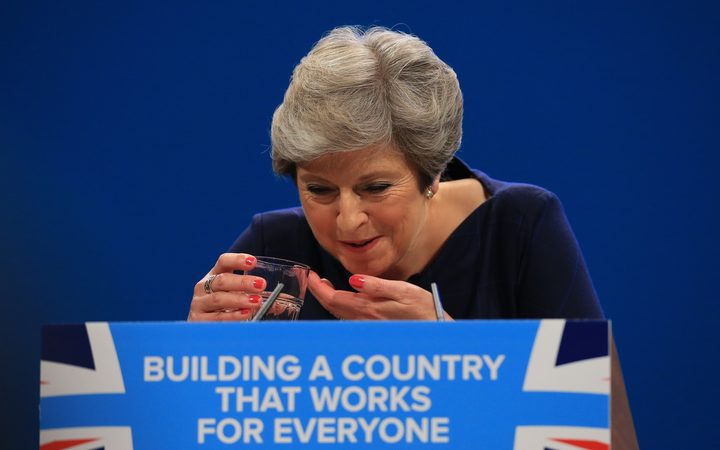 Theresa May splutters as she drinks water while losing her voice during her keynote speech. Photo: AFP

She started by apologising for her botched bet on a snap June election which stripped her party of its majority in parliament, then pitched a revitalised "British Dream" for which she proposed fixing broken markets and uniting the country.

She announced plans for more council houses and a cap on energy prices.

Mrs May was interrupted early on in her speech by comedian Simon Brodkin - also known as Lee Nelson - who managed to make it to the podium to hand her a P45 - a redundancy notice.

The document had been "signed" by her ambitious Foreign Secretary Boris Johnson.

Then Mrs May began a coughing fit and was repeatedly forced to take drinks of water, even coughing into her glass, and was proffered a lozenge from her finance minister, Philip Hammond.

While she was speaking, several letters fell off the slogans behind her on the stage.

The 61-year-old Mrs May won standing ovations for pressing on with the hour-long address, in which she took a more personal tone - saying she did not mind being called the "Ice Maiden" and describing her "great sadness" at not having children.

Her speech sought to offer party activists a renewal of Conservative values while making new promises to a younger generation and those "just about managing".

A persistent cough, a P45 and a faulty set... it wasn't the conference speech #TheresaMay would have hoped for pic.twitter.com/OcWhn0yjR6

Many in the audience said her coughing fit and the sudden appearance by the comedian had helped to win them over.

Nigel Farage, the former leader of the United Kingdom Independence Party, said May was so useless that if she remained as leader then Labour's Corbyn would soon be in power.

When the ghost of Frida Kahlo comes back to strangle you to death for abusing her image and everything she ever stood for. #CPC17 pic.twitter.com/jycxNYM9uf

Sources close to the prime minister have said that the she had caught the "conference cold", and that her many interviews and meetings this week have taken their toll on her voice.

To add to her woes, some of the letters fell off the conference stage backdrop. By the end it read: "Building a country that works or everyon."

Scottish Conservative leader Ruth Davidson said of the prime minister's performance: "If ever there was a metaphor for battling through adversity, that was it." 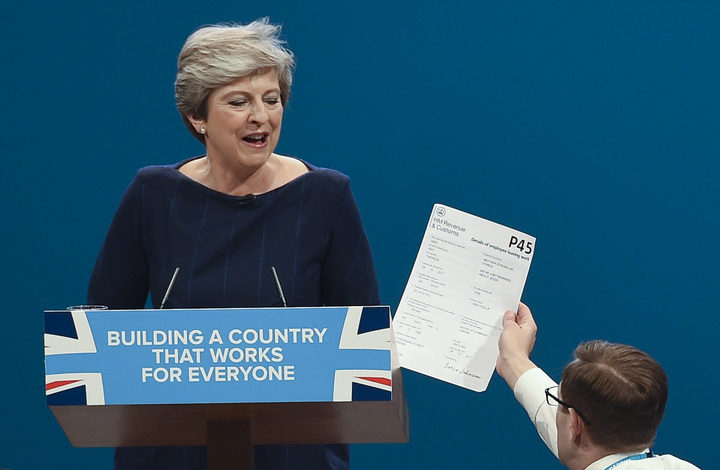 In the speech itself, Mrs May delivered a call for a "modern, compassionate Britain" and focused on her personal commitment to social justice and fairness.

She also apologised to activists in Manchester for an election campaign that had been "too scripted, too presidential".

And she said the "British dream" that "life should be better for the next generation" was out of reach for too many people, something she vowed to dedicate her premiership to fixing.

Having seen her Commons majority vanish after June's general election and facing calls to sack Foreign Secretary Boris Johnson over his interventions on Brexit, Mrs May attempted to use the conference to unite the party behind her "mission" to transform Britain.

Isn’t the British dream the one where we turn up naked and unprepared for an important exam? Or Brexit, as it’s otherwise known.

She said it would not be easy, but "it has never been my style to hide from a challenge, to shrink from a task, to retreat in the face of difficulty, to give up and turn away."

"And it is when tested the most that we reach deep within ourselves and find that our capacity to rise to the challenge before us may well be limitless."

The disruptions to the speech dominated discussion afterwards, but for Labour, shadow chancellor John McDonnell saying that there had been £15bn of pledges made by the end of the speech showing "the Tory magical money tree returns".

Lib Dem leader Sir Vince Cable called it "the speech of a brave prime minister struggling on, while her disloyal Cabinet colleagues openly plot against her".