Former American football star and actor OJ Simpson has been released on parole after nine years in a Nevada jail. 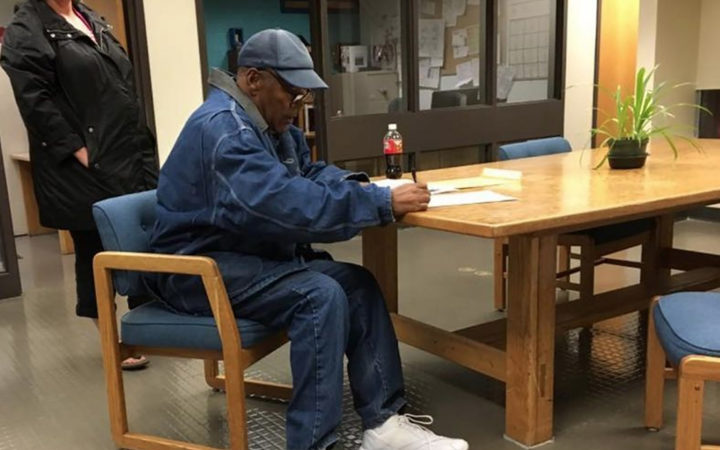 He had been serving time for armed robbery, assault with a deadly weapon and 10 other charges over a 2007 confrontation at a Las Vegas hotel.

Simpson was approved for early parole release at a board hearing in July.

In 1995 he was acquitted of the murder of his ex-wife Nicole Brown Simpson and her friend Ron Goldman.

In a Facebook post, Nevada Department of Corrections released an image and video of Simpson signing documents and leaving Lovelock Correctional Centre early on 1 October.

He will face restrictions - including up to five years of parole supervision.

The football player was sentenced to a maximum 33-year prison sentence in 2008 after storming a Las Vegas hotel room with five others in an effort to seize items from two sports memorabilia dealers.

Simpson said the belongings, which he described as images of his family and friends, were later handed over to him by officials after they were legally deemed to belong to him.

In 2013, the Nevada Board of Parole granted him parole on some of his convictions, but not for the more violent charges. In July this year, he was granted parole and approved for release in October.

Bruce Fromong, who was one of Simpson's victims in the robbery, testified in favour of him being granted freedom.

The spectacular fall of 'The Juice'

Simpson was found guilty in 2008, exactly 13 years to the day after he was famously acquitted in the double-murder case.

Despite the 1995 not-guilty verdict, a civil court jury held Simpson liable for the deaths of Brown Simpson and Goldman, awarding $US33.5m to their families.

A lawyer representing Ron Goldman's family told Associated Press this amount had nearly doubled with interest under Californian state law, and that the family would continue to seek payment from Simpson after his release.

Simpson has expressed his desire to move to Florida after leaving jail.

His lawyer Malcolm LaVergne said on Wednesday that he was feeling "very upbeat" ahead of the release.

Simpson became a cult figure in the National Football Leaue (NFL) after record-breaking performances for the Buffalo Bills team.

After retiring in 1979 he starred in television shows and movies, including the 1988 film The Naked Gun.