The UK ambassador to Myanmar was forced to interrupt foreign secretary Boris Johnson earlier this year as he tried to recite a colonial poem by Rudyard Kipling in public during a visit to the country's most famous Buddhist site. 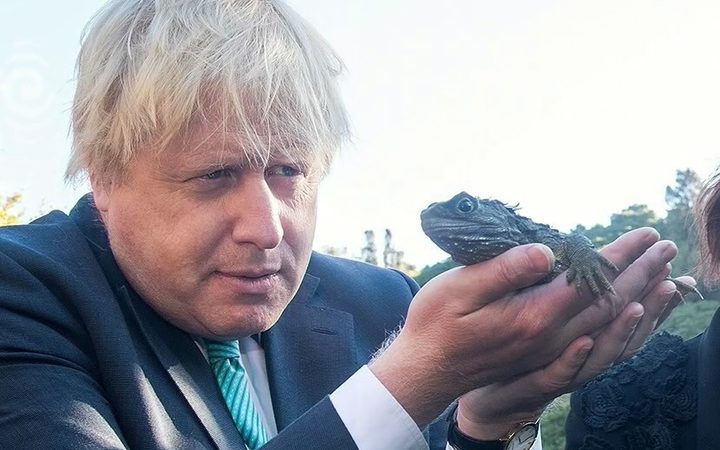 Boris Johnson holding a tuatara during a trip to New Zealand in July. Photo: RNZ / YouTube

Johnson, who helped lead the Leave campaign in the 2016 Brexit referendum, is caught on camera starting to recite Kipling's poem, Mandalay, after striking a bell at the Shwedagon pagoda in Yangon.

"The temple bells they say," Johnson says in television footage by UK public broadcaster Channel 4. "Come you back, you British soldier."

As Johnson continues with his recitation of the poem, which celebrates a soldier's love affair with a local woman during Britain's colonial rule of what was then known as Burma, the ambassador tenses.

"You're on mic. Probably not a good idea," British ambassador Andrew Patrick said.

"What, The Road to Mandalay?" Johnson asked.

"No. Not appropriate," the ambassador said.

Johnson replied "good stuff" and then started to take photographs of the scene with his telephone camera.

A spokeswoman for the Foreign Office declined to comment.

Prime Minister Theresa May's appointment of Johnson, who in the run-up to the referendum on EU membership compared the goals of the European Union to those of Adolf Hitler and Napoleon, caused consternation in European capitals.