Bali's governor has declared a province-wide natural disaster even before the eruption of the Mt Agung volcano, as thousands seek shelter away from the mountain. 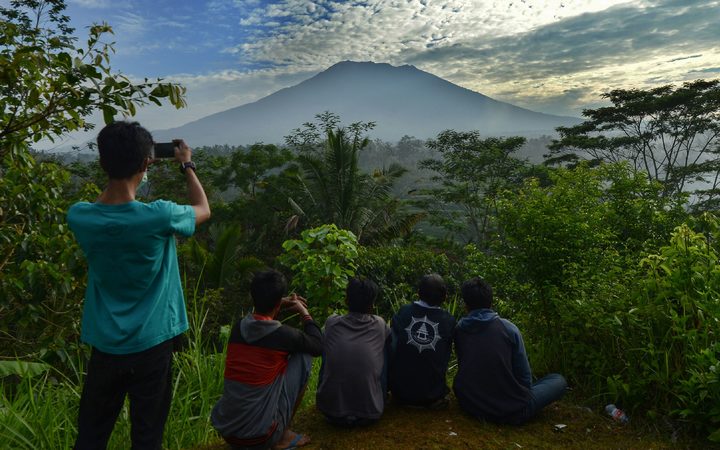 People look at Mount Agung in Karangasem on island of Bali, after warnings a volcanic eruption was imminent. Photo: AFP

Late on Friday night, the alert level for Mt Agung was raised to Level 4 - the highest possible rating - following a "tremendous increase" in seismic activity.

Officials said more than 35,000 people have fled the region around the volcano, more than double previous estimates.

The number includes people who left voluntarily as well as those ordered to evacuate.

In its last eruption in 1963, the 3031m volcano hurled ash as high as 10km and remained active for about a year.

More than 1000 people were killed during that period, and hundreds were injured.

"Volcanic activity remains high and there are indications of magma rising to the surface and causing tremors," Sutopo Purwo Nugroho of the National Disaster Management Agency said.

Governor Mangku Pastika said the natural disaster declaration meant regencies across the island would have to help take care of evacuees.

He said another 50,000 people could end up in shelters in if the volcano erupts.

Many of the makeshift evacuation centres are overcrowded.

In one centre, in the town of Klungkung, south of Mt Agung, locals reported a shortage of clean water and amenities.

The National Disaster Mitigation Agency set up an exclusion zone within 9km of the crater or within 12km to the north, north-east, south-east and south-south-west, where lava flows could reach.

Officials said there was no current danger to people in other parts of Bali.

Governor Pastika asked tourists to stay away from the evacuation zone near the volcano as he doesn't want anything to happen to them.

The mountain, 72km to the northeast of the tourist hotspot of Kuta, is among more than 120 active volcanoes in Indonesia.

The country of thousands of islands is prone to seismic upheaval due to its location on the Pacific "Ring of Fire", an arc of volcanoes and fault lines encircling the Pacific Basin.