The world's largest school-based volunteer organisation, which has sent thousands of New Zealand students overseas, is stopping its projects in orphanages. 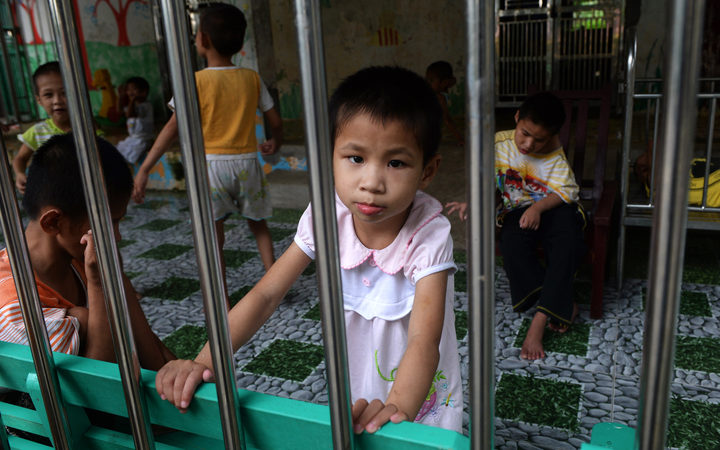 A young girl looks at visitors to a state-run orphanage on the outskirts of Hanoi, Vietnam in September 2014 (file photo). Photo: AFP

World Challenge sends students to developing countries for travel and volunteer work. It will no longer offer trips to orphanages after research showed the practice was harming vulnerable children.

The evidence is compelling enough to convince World Challenge to quit the industry.

For 30 years, the organisation has been linking schools to volunteer projects in many countries including Cambodia, Vietnam and Madagascar.

It is big business. In the past decade, the volunteer tourism industry - known as voluntourism - has exploded, and is now worth about $173 billion globally, according to ReThink Orphanages.

In Australia, World Challenge has partnerships with 300 schools and sent 150 children to orphanages last year.

Antoinette Beaumont went on a trip in 2012 to a Cambodian orphanage. For two weeks, Antoinette and other students taught English, played sport with the kids and donated desks.

She told the ABC she had conflicting feelings about the adventure.

"To go overseas to experience an orphanage and experience how people really do live, and the struggles that kids our own age face, I think that is an incredible experience," she said.

"On the other hand, if that is at the expense of children in these Third World countries, then I think that is absolutely terrible and horrific."

Keily Dimsey said she now thought she was a hindrance to the children at the Vietnamese orphanage she visited.

The group of students did things they weren't qualified to do, and there was little supervision or organisation of activities, the 22-year-old said.

"I don't think we had the right to be in kids' rooms that were sick, and playing with them and changing things that likely didn't need to be changed," she said.

"I don't regret that I did it, because I'm glad that I now understand a bit more about why it could be damaging, but overall I feel like I did more harm than good - along with everyone else around me."

'It's plain and simple that it's not good for the kids'

World Challenge said it had realised it was doing the wrong thing, and would end its associations with orphanages by the end of this month.

"Knowing what we know now and with the benefit of hindsight, potentially not everything we did was constructive," Asia Pacific manager Mark Walters said.

"Whilst it might have been good for our kids in the past, it's plain and simple that it's not good for the kids over there, and it's not something that we can continue doing."

At its peak, World Challenge worked with 12 orphanages around the world. Recently, it had been associated with five in Cambodia, Vietnam, Mongolia and Madagascar.

The last volunteer trips were completed in the middle of the year, and the company was now in the final stages of negotiating its exit from the industry.

"In continuing to go to orphanages we were perpetuating this reliance and dependency on those sorts of institutions," Mr Walters said.

The company's decision came after lobbying from ReThink Orphanages, and the organisation's Leigh Mathews said she hoped other companies would follow suit.

"There are a lot of companies that facilitate these trips," she said.

According to research by ReThink Orphanages, 14 percent of Australian schools had an association with an orphanage in 2016 and more than half of all Australian universities advertised orphanage placements as part of their international volunteering opportunities.

But finding out exactly how much the travel industry was making from orphanage trips was difficult because companies weren't required to report it, Ms Mathews said.

"We simply don't have the data and we don't have the mechanisms in place to collect that data, whether that is at a government level, a regulatory level, or self-reporting," she said.

"In my experience, I haven't found the travel sector to be overly transparent in talking about this issue, and how much money they are making off orphanage tourism, and they are not required to report that here in Australia."

According to research from UK-headquartered charity Lumos, there are eight million children living in orphanages around the world, but 80 percent have at least one living parent or family member.

Many of the children are from poor families, with parents convinced their children will have a better life at the orphanage, according to Lumos.

Parents are often discouraged from visiting or maintaining a relationship with their child, the charity said.

Ms Mathews said the reason orphanages were booming was not because there were more orphans, but because there was a demand from Western-country volunteers who wanted to meet and help orphaned children.

"If you were to map the geographic location of a lot of orphanages, and overlay tourist hotspots, you would see a very close correlation," she said.

'Not all orphanages are out to exploit children or volunteers'

At this stage, World Challenge is the only school-based volunteer company to sever ties with orphanages.

Some companies, such as New Zealand-based IVHQ, have said they would continue to run orphanage volunteering trips because they believed there was a need for them.

In a recent blog post, IVHQ founder Dan Radcliffe wrote that ending orphanage volunteering would be "punishing the good orphanages out there who genuinely need the help".

"In most cases, volunteers in orphanages provide a vital source of hands-on support, energy and skill that makes a huge difference to the lives of children, and has a positive flow-on effect in the wider community," he wrote.

"Not all orphanages are run by bogeymen out to exploit children or volunteers."

But according to Ms Mathews, there was no such thing as a "good" orphanage because all institutional care was bad for a child's development.

Children should only be placed in an orphanage as a last resort, if there were no family-based care options available, and for a maximum of three months, she added.

"We have over 70 years of research to back up that that model of care causes more harm to children than it does help," she said.