Are you lonely on your holiday? Need company? Charleroi Hotel in Belgium may have the answer. 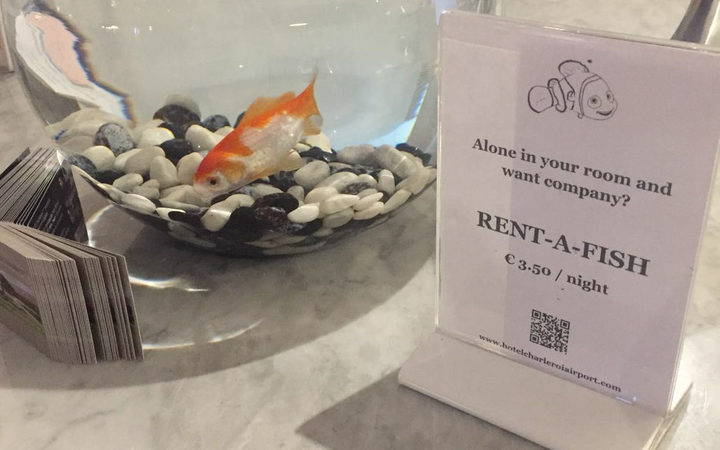 There's a sign in the reception next to a small fishbowl, with a goldfish, a few dozen pebbles and some water inside. 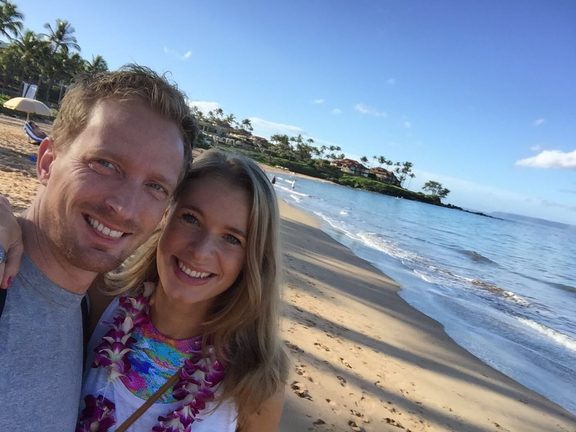 My Dutch friend Rieke Gorter posted the photo on Facebook the other day.

She and her boyfriend Clin Jennissen were on their way from Mijdrecht, near Amsterdam, to Bucharest in Romania where they were to start a holiday across Russia and Asia.

They were in Charleroi for just one night so stayed near the airport at the city's namesake hotel.

I was intrigued by this offer so, naturally, I posted it on Twitter.

More than 12,000 people have retweeted - many saying they love the idea and would rent the fish, or saying they'd love it if the hotel offered dogs and cats instead.

Some mentioned they'd stayed in other hotels with a similar offer, and one man said restaurant patrons in India were sometimes offered the chance to 'rent a fish' for dinner company. 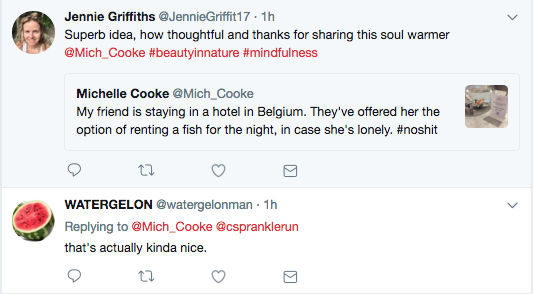 Others considered it cruel and a form of animal neglect. 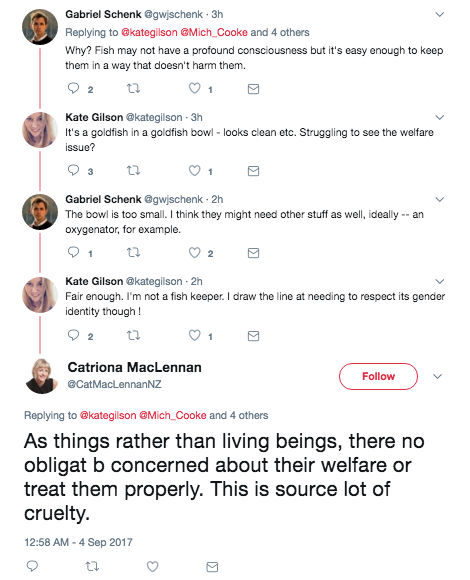 Indeed, the northern Italian city of Monza banned its residents from keeping fish in bowls in 2004, arguing it limited oxygen and didn't provide enough space for the creatures.

Zurich, Switzerland also has a goldfish law - you can't own just one goldfish.

Past studies suggest the fish are social creatures and it's detrimental to their well-being if they're alone. There are also claims that being in a bowl distorts the fish's perception of reality.

It turns out even the commonly-held belief that goldfish only have a seconds-long memory may be just a myth. According to a 2009 study, goldfish memories last for months.

However, hotel manager David Dillen said the fish had been at the hotel for more than four years and were well taken care of.

"They have a big fish tank in the house-keeping department, with a shelter in it, oxygen and plants. When we think it's necessary, we put them there for a few days."

The offer was initially a "gimmick", but customers enjoyed the interaction, so the idea stuck.

"It has never been a serious revenue generating thing of course. People sometimes have to wait for the check-in, and the fishes make them smile."

"We thought the idea was brilliant, to never have to feel lonely in a hotel with an animal to keep you company - always someone to talk to," Rieke said.

"There were more fish to choose so you can rent one that fits your character. One that is funnier than another or likes deep conversations."

But the couple said they were animal lovers and did not think goldfish should be enclosed in bowls for the hotel to pass from one customer to another.

"We don't want people to copy this idea. We are really fond of animals."