Another Melbourne council has dumped its Australia Day celebrations after an emotional town hall meeting. 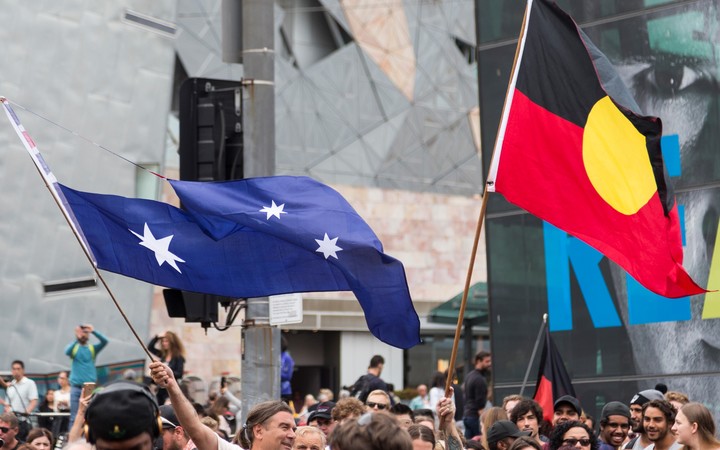 Protesters wave the Australian Flag with the Union Jack cut out and an Aboriginal Flag, during a protest, organised by Aboriginal rights activists on Australia Day in Melbourne. Photo: AFP / Anadolu Agency

Australia Day is the anniversary of the arrival of Britain's first settlers in 1788, an event many Indigenous Australians refer to as "Invasion Day".

The City of Darebin, which covers northern suburbs including Northcote, Preston and Reservoir, voted 6-2 for the series of controversial changes.

The council's Australia Day citizenship ceremony has been moved to 25 January and its Australia Day awards have been renamed the "Darebin Community Awards".

Last Friday, the council decided to bring forward the vote saying it was "in response to an emerging public debate regarding Australia Day and the #changethedate campaign which Darebin councillors have been actively engaged in".

It followed neighbouring Yarra City Council's decision to no longer refer to 26 January as Australia Day and hold an Indigenous-themed event instead of an annual citizenship ceremony on the day.

The highly contentious move resulted in the federal government stripping the council of its powers to hold citizenship ceremonies and Prime Minister Malcolm Turnbull describing the council's decision as an "attack on Australia Day" and a repudiation of Australian values.

Several Darebin residents have criticised what they described as a lack of community consultation.

David Schulz said it was not council's business to be changing Australia Day celebrations.

"Australia Day is 26 January and it should remain that day. They're doing it without proper consultation and they're just making decisions for us," he said.

"I'm definitely worried about a domino effect, once two councils do it, others will just follow their lead."

"We need greater information and education and there are a whole bunch of people who feel really threatened and I don't know why," she said.

"This is not debatable, this all happened. It's a fact. This is a really simple thing and it's about us coming together because the 26th of January is a bad day.

Councillor Trent McArthy said the changes were necessary and rejected the charge that they had not been enough consultation.

"This has been discussed in the community for a long time," he said.

"[The] Australian people need to come to terms with the truths of this country to understand.

"We are at risk of losing our citizenship ceremonies but we need to make this change to respect our Indigenous people."

It is believed several other councils are now considering similar moves, including Hepburn Shire Council at Daylesford, about 100km north-west of Melbourne, and Moreland Council in the city's inner north.

According to the council, Darebin has the second-largest Aboriginal and Torres Strait Islander population in metropolitan Melbourne.