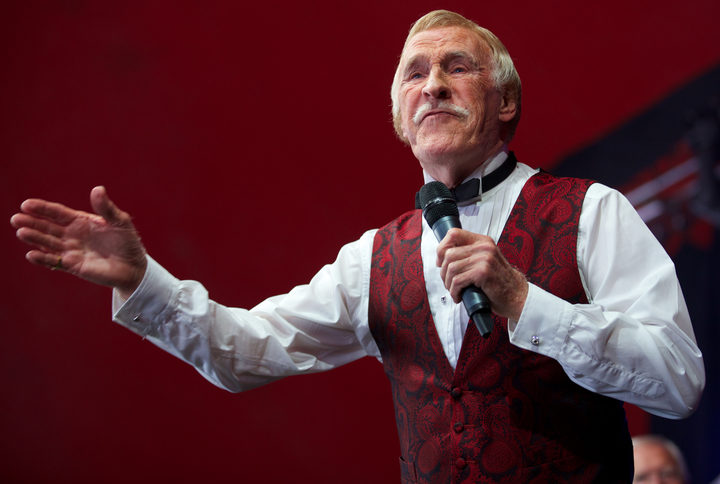 The former Strictly Come Dancing host had been unwell for some time and was in hospital earlier this year after a severe chest infection.

His long career in show business began when he was aged just 14.

He became Britain's best-paid TV star, famous for hosting game shows like The Generation Game, Play Your Cards Right and The Price is Right.

The whole Strictly team is devastated to hear of the passing of Sir Bruce Forsyth. Bye Brucie you're our favourite ✨ https://t.co/TJS4egUgKu pic.twitter.com/vpwtP4zBFS

A statement from his manager Ian Wilson said he died "peacefully at his home surrounded by his wife Wilnelia and all his children".

"A couple of weeks ago, a friend visited him and asked him what he had been doing these last 18 months. With a twinkle in his eye, he responded, 'I've been very, very busy... being ill!'" he added.

Sir Bruce's family thanked "the many people who have sent cards and letters to Bruce wishing him well over his long illness", adding there would be no further comment at the moment.

Tributes have been paid by his friends and admirers in the show business world. Sir Bruce's Strictly co-host Tess Daly said she was "heartbroken".

"From the moment we met, Bruce and I did nothing but laugh our way through a decade of working together on Strictly Come Dancing and I will never forget his generosity, his brilliant sense of humour and his drive to entertain the audiences he so loved," she said.

Former Strictly judge Len Goodman also paid tribute, saying: "As long as I can remember there has always been Bruce on our TV.

"His work ethic, professionalism and charm will be with me forever. Bruce it was nice to see you to see you nice."

Strictly presenter Claudia Winkleman, who replaced Sir Bruce after he left the show, tweeted that he was "the King of TV, the Prince of performers and the most generous of people... all toe-tapping twinkle, all kindness, all love....

He was the King of TV, the Prince of performers and the most generous of people... all toe-tapping twinkle, all kindness, all love....

"The Bruce you saw really was the man he was. We'll miss him so much."

Strictly judge Craig Revel Horwood added: "Extremely sad to hear the news of Bruce's passing. A true legend and national treasure. He will be deeply missed but always remembered."

She added: "Working with him on Strictly was personally a joy. His endless teasing of my judging style, particularly with strong sportsmen, was an ongoing joke.

"His enormous support after I was let go from the Strictly panel meant so much."

In a tweet, Prime Minister Theresa May said the country had "lost a national treasure", adding: "Like millions of others, for years I watched Sir Bruce dance, sing, joke & laugh. He will be sorely missed."

BBC director general Lord Hall described Sir Bruce as "one of the greatest entertainers our country has ever known".

Comedian Jimmy Tarbuck added: "He could do it all. He was magnificent and he was a great entertainer. He could dance, he was a very nice pianist, he was good at sketches, he was the greatest moaner in the world on the golf course, and he was a unique friend to me."

Sir Michael also praised Sir Bruce's ability to manage his career, saying: "He was very canny - we only know about the shows he said yes to, what we don't know are the hundreds of ideas he said, 'That's not for me.' He had the smartness - that's the sign of a great star."

BBC Radio 4 presenter Nicholas Parsons added that he was "devoted" to Sir Bruce.

"He had great charm, great humour - he was an all-round performer. He was one of the country's most talented players - a great dancer, great singer and a comedian and also very good actor. The way he ran a game show was exceptional - a unique talent. He was a lovely man."

The Beano tweeted a picture of Sir Bruce which appeared in the comic in 2008, describing him as an "entertainment legend".

Sir Bruce had not been seen in public recently, due to ill health. He was too frail to attend the funerals of close friends Ronnie Corbett and Sir Terry Wogan last year.

In 2015, the presenter underwent keyhole surgery after suffering two aneurysms, which were discovered following a fall at his Surrey home.