Donald Trump is facing criticism from both Republicans and Democrats for his response to violence at a Virginia white supremacist rally. 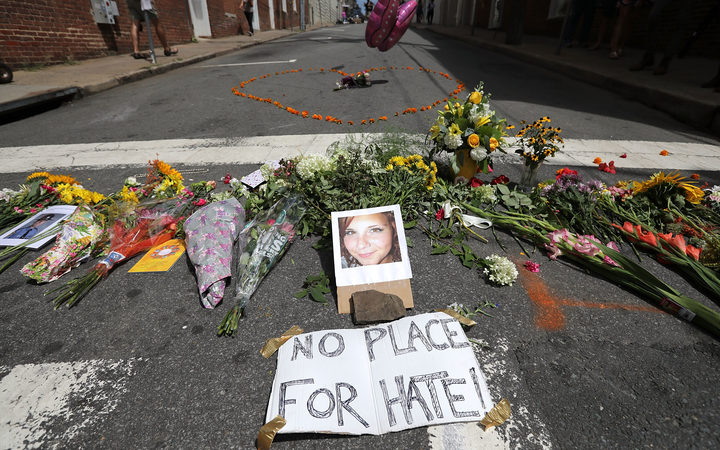 Heather Heyer was killed when a group of counter-protesters was rammed by a car. Photo: AFP

A woman was killed and 19 people were injured when a car ploughed into a crowd of counter-protesters in Charlottesville.

Mr Trump condemned violence by "many sides" but stopped short of explicitly condemning the far-right.

The White House has since clarified in a statement that his condemnation included white supremacists.

"The president said very strongly in his statement yesterday that he condemns all forms of violence, bigotry and hatred. Of course that includes white supremacists, KKK, neo-Nazi and all extremist groups," a spokesperson said on Sunday.

Hundreds of white nationalists converged for Saturday's 'Unite the Right' march, called to protest against the removal of a statue of a general who had fought for the pro-slavery Confederacy during the US Civil War.

The far-right demonstrators, who included neo-Nazis and Ku Klux Klan (KKK) members, clashed with counter-protesters. People punched and kicked each other, and pepper spray, used by both sides, filled the air.

The crowd in Charlottesville, almost entirely white and male, put their arms up in Nazi salutes and cheered on the former grand wizard of the KKK, David Duke.

As the rally was dispersed, a car was driven into a crowd of counter-protesters, the force of the crash flinging people into the air.

James Fields, 20, from Ohio, the alleged driver, is in detention on suspicion of second-degree murder and the FBI has opened a civil rights investigation. 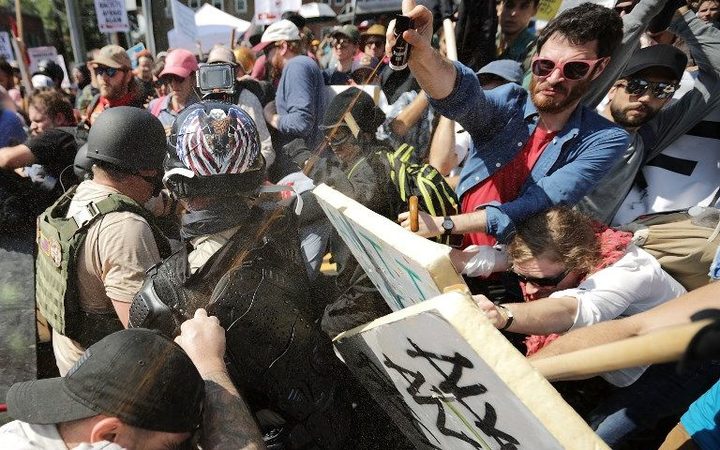 Apart from the car-ramming incident, Charlottesville police said at least 15 were wounded in other violence related to the far-right march.

Virginia governor Terry McAuliffe said his only message for the white supremacists who had come to Charlottesville was, "Go home".

Some observers say that Mr Trump's election to the White House has re-energised the far right across the US.

The Southern Poverty Law Center, a civil rights organisation, says that "Trump's run for office electrified the radical right, which saw in him a champion of the idea that America is fundamentally a white man's country."

Mr Trump said he condemned "in the strongest possible terms this egregious display of hatred, bigotry, and violence on many sides".

"The hate and the division must stop right now," he told reporters, speaking in New Jersey, where he is on a working holiday. "We have to come together as Americans with love for our nation."

But his comments, which did not explicitly condemn the white extremist groups involved in the rally, did not go far enough for many Democrats and members of Mr Trump's Republican party.

Mr. President - we must call evil by its name. These were white supremacists and this was domestic terrorism. https://t.co/PaPNiPPAoW

"Very important for the nation to hear [President Trump] describe events in #Charlottesville for what they are, a terror attack by #whitesupremacists," Republican senator Marco Rubio tweeted.

Another senior Republican, Ted Cruz, called the car-ramming a "grotesque act of domestic terrorism" and there were more strong words from Senator Orrin Hatch of Utah.

House Democratic leader Nancy Pelosi said "the president's talk of violence 'on many sides' ignores the shameful reality of white supremacism in our country today".

Mr Trump's former Democratic rival for the presidency, Hillary Clinton, said "every minute we allow this to persist through tacit encouragement or inaction is a disgrace and corrosive to our values".