Eighteen people have been convicted of abusing girls in Newcastle who were plied with alcohol and drugs before being forced to have sex. 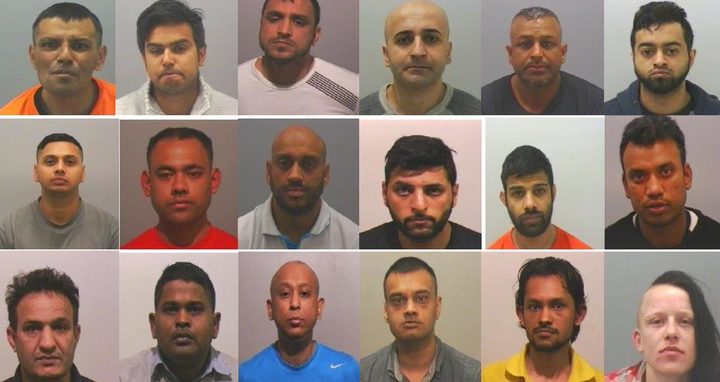 The 17 men and one woman were convicted of rape, supplying drugs and conspiracy to incite prostitution Photo: Supplied / Northumbria Police

The vulnerable victims, some as young as 14, were exploited by a "cynical organisation", an English court heard.

The 17 men and one woman were convicted of rape, supplying drugs and conspiracy to incite prostitution.

Over the course of four trials, 20 young women gave evidence covering a period from 2011 to 2014.

These trials involved 26 defendants facing a total of more than 100 charges and 22 victims.

Those prosecuted were mainly British-born, with most living in the West End of Newcastle.

Of the 26, three people have been jailed. The rest will be sentenced next month.

It also emerged during the court process that police paid a convicted child rapist £10,000 ($NZ17,700) as an informant.

The victims were at first flattered by the attention of the men who apparently befriended them, but were then lured to parties, known as "sessions", by the promise of alcohol and drugs - often mephedrone, Newcastle Crown Court heard.

Bags of the drug were left on coffee tables for the girls to help themselves.

The parties took place at premises around the West End, including the top floor of tower block Todd's Nook, where one teenager said she was raped three times.

The prosecution said they became the "vulnerable victims of an organised, cynical, systematic organisation in which they were passed between their abusers".

Some spoke of being "too intoxicated" to defend themselves, while others became addicted and had to commit sexual acts in return for drugs.

One victim said she had attended about 60 parties and another told of going to an address where there were two older men and a woman, who seemed "frightened and scared, like a slave".

She said: "They told us what she would do for them for money and drugs or she'd get battered."

Another victim said: "I knew that if we wanted drugs or alcohol we would have to do something.

"[He] had us too intoxicated to fight him off. One time, [he] locked the door. I was told I would only be allowed out if I had sex."

Northumbria Police set up Operation Sanctuary in December 2013 to investigate claims of sexual abuse against girls and young women.

The investigation is ongoing and to date has resulted in 461 arrests. Police have spoken to 703 potential complainants and 278 victims have been identified.

Due to its size, the investigation was split into a number of spin-off operations.

Operation Shelter uncovered groups of men in the West End of Newcastle - many of whom were known to each other - who exploited vulnerable young women and girls over a period from 2010 to 2014.

This eventually led to four separate trials, the first commencing in September 2015 and the final one which has just concluded, allowing previous reporting restrictions to be lifted.

One victim, Sarah (not her real name), was 19, extremely vulnerable and unable to look after herself.

In the new year of 2014, Sarah told the police she had been raped by Abdul Minoyee. A police officer took Sarah on a tour of the West End to try identify Minoyee's house and car and other places where these "parties" had taken place.

The detective in charge of Sarah's case told his bosses that what she had said signalled something much bigger.

Days later the officer's hunch was given added weight when two girls in care, aged 14 and 15, reported that they had been repeatedly raped by a group of older Asian men.

They described being driven into Newcastle where they were plied with alcohol and cocaine before being raped and beaten by several men. They were given money before being returned home.

One of the victims was in local authority care at the time. Newcastle City Council has launched a serious case review that is due to be published in December.

"The victims ... have been brave beyond belief and undoubtedly have made our city safer."

Chief Constable Steve Ashman said: "We have not and will not stop.

"These are criminals and there has been no hesitation in arresting them and targeting them using all the means at our disposal."

Now that reporting restrictions can be lifted, it can be revealed that a police officer was sacked for failing to investigate a sex offender's phone.

It related to an earlier Operation Sanctuary investigation, which resulted in the conviction of Bahmani Ahmadi.

Mr Ashman said the officer should have been much more diligent, and that his dismissal should provide reassurance that the police culture in Northumbria had changed.