US officials say they have suspended a search and rescue operation for three marines missing after their aircraft crashed off the Australian coast. 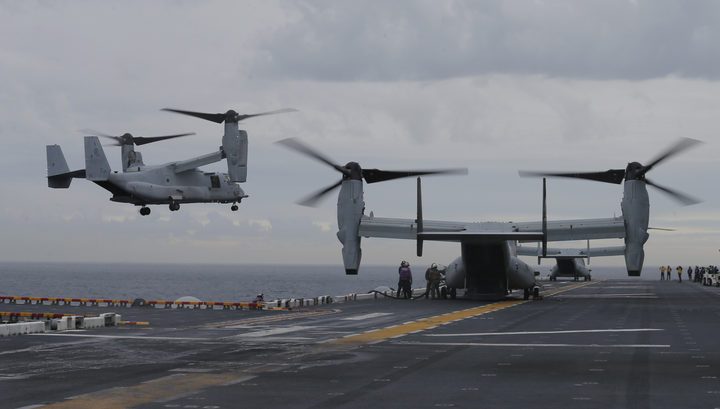 Osprey aircraft take off from the deck of amphibious assault ship the USS Bonhomme Richard during the Talisman Sabre exercise Photo: AFP

Saturday's incident involved an MV-22 Osprey belonging to the US Marines based in Okinawa, Japan.

The third Marine Expeditionary Force said they had shifted their operations to recovery efforts, which could last several months.

Families of the three marines have been notified. Teams rescued 23 people.

The circumstances of the incident off the east coast of Australia are still under investigation, a statement said.

"As the sea state permits, recovery efforts will be conducted to further search, assess and survey the area, in coordination and with assistance from the Australian Defence Force," it added.

There were 26 people on board including the crew.

Australia's Daily Telegraph newspaper quoted military sources as saying the aircraft had been trying to land on the USS Ronald Reagan aircraft carrier.

US military forces have been operating in the area as part of a joint training exercise called Talisman Sabre. It involved some 30,000 personnel from both countries.

The MV-22 Osprey is a tilt-rotor aircraft similar to a conventional plane but has helicopter-like rotor blades which allow it to take off vertically, without a runway.

The unusual aircraft has been described as "an exceptionally difficult aircraft to fly".

Executive Director of the Australia Defence Association Neil James said the Osprey was unlike any other aircraft.

Despite the difficulty, the Osprey had a good safety record, he said.

"It's had 10 crashes over a nearly 20-year period with lots of hours flown including 18,000-odd hours in combat so the ratio of crashes to the airframe over its operating life isn't unusually high, particularly for something that is so difficult to fly.

"Most of the crashes have been attributed to the difficulty in flying it."

The recovery and salvage would predominantly aim to retrieve the bodies of the missing marines, he said.

"If the missing air crew are dead, they're probably still in the aircraft.

Ospreys have been involved in a series of high-profile crashes in recent years.

In December, five crewmembers of an Osprey had to be rescued after their craft conducted a shallow-water landing off Okinawa after a training mishap in which a rotor blade cut a refuelling hose, according to the Marine Expeditionary Force.

In January, three US soldiers were injured in the "hard landing" of an Osprey in Yemen.