Russian Prime Minister Dmitry Medvedev has said new sanctions imposed by the US are tantamount to declaring a "full-scale trade war" against Moscow. 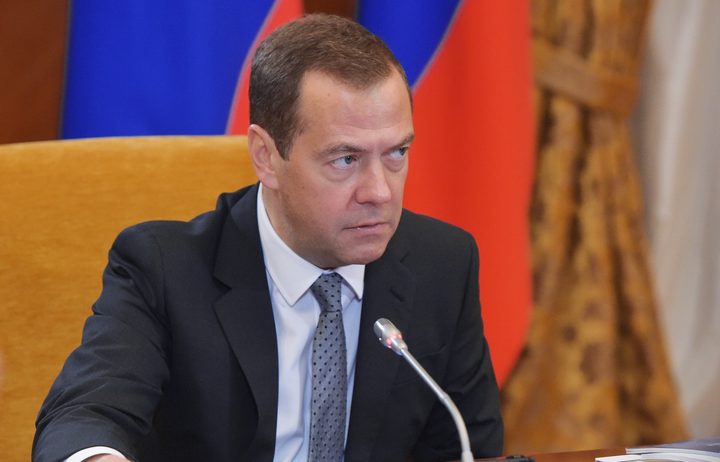 He said the measures, signed by Donald Trump, demonstrated the complete impotence of the US president, whom he said had been humiliated by Congress.

The law aims to punish Russia for its alleged meddling in the 2016 US elections and its actions in Ukraine.

Mr Trump accused Congress of overreach on the legislation.

In signing the Countering America's Adversaries Through Sanctions Act on Wednesday, he attached a statement calling the measure "deeply flawed".

The legislation also imposes sanctions on Iran and North Korea.

Iran said the new sanctions violated the nuclear deal and it would respond in an "appropriate and proportional" manner, reports the semi-official Isna news agency.

North Korea has so far made no public comments on the US move.

Writing on his Facebook page on Wednesday, Mr Medvedev said the sanctions package "ends hopes for improving our relations with the new US administration.

"The sanctions regime has been codified and will remain in effect for decades unless a miracle happens."

Mr Medvedev also warned that new steps would follow aimed at removing President Trump - whom he described as a "non-systemic player" - from power.

Moscow - which denies interfering in the US presidential election - had already retaliated last week when Congress passed the bill, by expelling 755 people from the US embassy and consulates in Russia, and also by denying access to a US country house and a warehouse in Moscow.

Several European nations, including Germany, are fearful of the economic consequences and European Commission President Jean-Claude Juncker has warned of "unintended unilateral effects that impact the EU's energy security interests".

'I can make far better deals'

President Trump has repeatedly rejected any allegations that his campaign staff colluded with Russia to help him win.

And he accused Congress, which last week overwhelmingly passed the bill and sent it to the White House, of overstepping its constitutional authority.

"As president, I can make far better deals with foreign countries than Congress," he said.

Allegations by the US intelligence community that Russia interfered in the US election to aid Mr Trump are currently being investigated by Congress and a special investigator.

The sanctions, which are also in response to Russia's annexation of Crimea, come months after former US President Barack Obama expelled 35 Russian diplomats.

Republican Lindsey Graham praised the bill after it passed, pointing out that Mr Trump's options were limited since there were enough votes to overcome a presidential veto.

"President Putin did something that nobody in America could do. He united the Congress," the South Carolina senator told CNN.

Senior Russian parliamentarian Konstantin Kosachev said that Mr Trump was "capitulating" by not standing up to Congress.