Montreal's Olympic Stadium has been opened to shelter a sudden increase in asylum seekers arriving into Canada from the US. 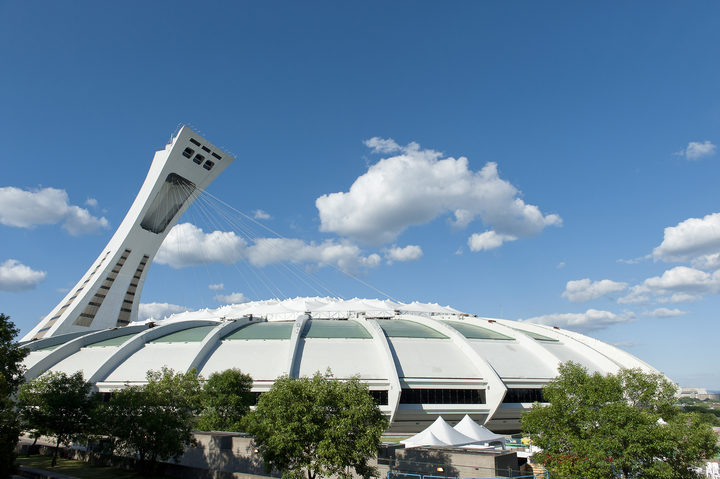 Montreal Olympic Stadium, which has been opened to temporarily house an influx of refugees. Photo: AFP

More than 4300 people have crossed into Canada seeking refugee status since January, with more than 3300 crossing into Quebec through to the end of June, straining resources of government and community groups.

Francine Dupuis of Praida, a provincial programme for the reception and integration of asylum seekers, said another 1200 people crossed into the province in July, around 90 percent of them from Haiti.

She said the province has experienced waves of people seeking refugee status before - most recently Syrians crossing in the spring - but that last month's numbers are unprecedented.

"Usually it comes and goes and it stabilises quite fast," she said. "In this case what we are fearing is it might not stabilise."

Now, relevant agencies in Quebec responsible for the welfare of migrants when they first arrive are scrambling to find beds and other resources.

Praida takes care of housing and the other immediate needs of refugee claimants for around two weeks after they arrive in the province and then continue to offer mental and physical health services for a few months.

Montreal's Olympic stadium received a request for space last Friday and asylum seekers began to be moved into the building, one of Montreal's most well-known landmarks, on Wednesday morning.

The stadium will be used as needed until autumn. Other centres have also been opened across the city. 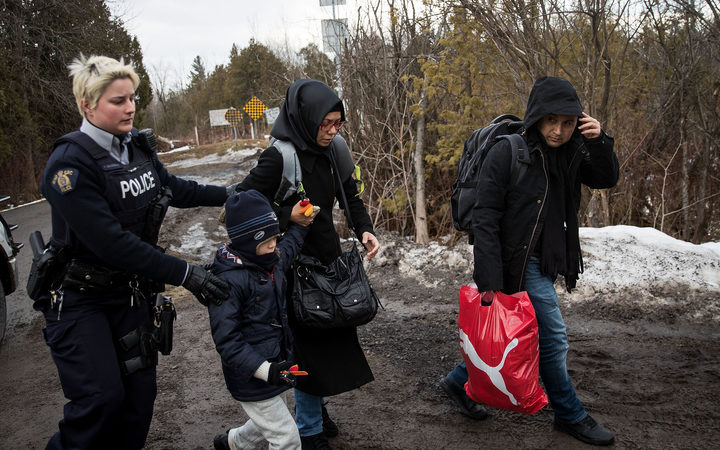 A family of three is escorted to a police vehicle by a Royal Canadian Mounted Police officer after they illegally crossed into Hemmingford, Quebec from the US. Photo: AFP

Meanwhile, US President Donald Trump has backed an immigration overhaul that would reduce the number of permanent, legal migrants allowed in the US each year by 50 percent.

The bill would end diversity lottery visas and curb the number of refugees offered permanent residency in the US.

The proposal would also no longer give green card preference to the extended family or adult children of immigrants who already live legally in the US.

However, spouses, children under age 18 and sick parents would still be offered preference.

Mr Trump has long vowed to crack down on the US immigration system.

The proposed changes have a long way to go before becoming law and could face resistance in Congress from members of both parties.

The Trump administration marked a victory in June, when the US Supreme Court partially restored the president's controversial executive order temporarily restricting travel from six mainly Muslim countries and freezing the refugee programme.

Manitoba and British Columbia have also both seen an influx of hundreds of asylum seekers.

Most of those who cross illegally have been quickly apprehended by the Royal Canadian Mounted Police and other law enforcement agencies.

Once in custody, they are identified, searched and screened.

Immigration Partnership of Winnipeg director Abdikeheli Ahmed said the people making such crossings were in desperate need of help.

"There's not many people who will walk 20 degrees below on open fields of snow for five hours just to perpetrate a criminal act.

"People are in dire need of protection and they want to survive and they want to find a place to live and to be safe from being deported to where they are going to be persecuted. And this forces them to make these kind of trips."

If they are eligible to make an asylum claim, they are allowed entry and referred to the Immigration and Refugee Board of Canada.

Prime Minister Justin Trudeau has been under pressure to do more to secure the border amid concerns about the influx.

Calls have been made to suspend the Safe Third Country Agreement, under which refugee claimants are required to request protection in the first safe country they arrive in.

It is a policy meant to better manage refugee claims and to avoid so-called "asylum shopping" between countries.

But it is also among the reasons the asylum seekers are avoiding trying to come to Canada at official ports of entry.

So far, Ottawa is standing behind the agreement, which came into effect in 2004.

Quebec officials will be holding a press conference on Thursday.