At least 547 young members of the Regensburger Domspatzen boys choir in Germany were subjected to physical and in some instances sexual abuse over a period of 60 years, a new report says. 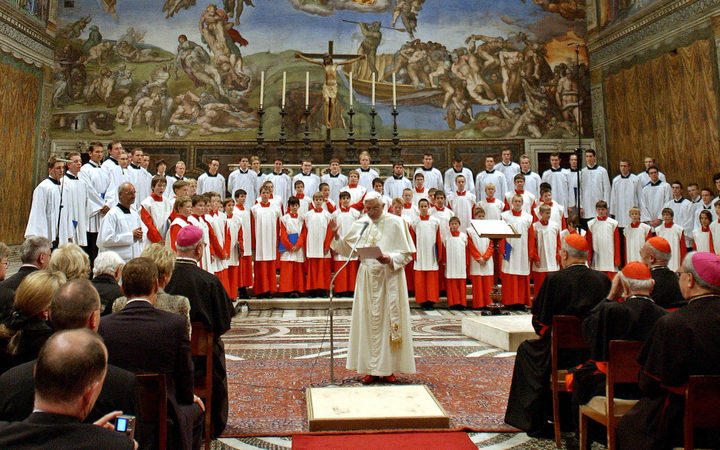 Pope Benedict XVI attends a concert by the Regensburger Domspatzen boys choir at the Sistine Chapel in the Vatican in 2005. Photo: AFP

The report accuses 49 members of the Catholic Church of carrying out the abuse between 1945 and the early 1990s.

The alleged perpetrators are unlikely to face criminal charges because of the amount of time that has elapsed.

Victims said the experience was like "a prison, hell and a concentration camp".

The alleged physical abuse relates to children attending both the Regensburger Domspatzen's pre-school and high school, according to the lawyer tasked with investigating the abuse, Ulrich Weber.

Among those singled out for criticism in the report was former choirmaster Georg Ratzinger, elder brother of retired Pope Benedict XVI.

Mr Weber said that while Mr Ratzinger, now 93, had no knowledge of sexual abuse, "one can accuse him of looking the other way and failing to intervene".

It was "never discussed" while he ran the choir, he has said.

He has in the past admitted to occasionally slapping boys but insisted he never beat them until they were "black and blue".

Representatives from the Regensburger Domspatzen boys choir have yet to officially respond to the report.

Presenting his findings on Tuesday, Mr Weber said the investigation had found 500 cases of physical abuse and 67 instances of sexual abuse over six decades.

However, he said he was unable to contact or speak directly to a number of former students and said he estimated the true number of victims to be as high as 700.

Of the 49 church members who carried out the abuse under what was described as a "culture of silence", nine were found to have been involved in sexual abuse, Mr Weber said.

He said the alleged perpetrators had been identified but were not expected to face criminal charges because the alleged crimes took place too long ago to be legally valid.

He said the victims described their experiences at the boarding schools in southern Germany as "the worst time of their lives, characterised by fear, violence and hopelessness".

The church has previously offered to pay the Regensburger victims compensation of between €5,000 and €20,000.

The 1000-year-old choir was initially rocked by allegations of widespread sexual abuse in 2010.

A 2016 report into the allegations found that 231 children had been abused.

Mr Weber also criticised Regensburg Bishop Gerhard Ludwig Müller, who is now a cardinal, for the weaknesses of the initial review of the scandal when it first came to light in 2010. The cardinal has rejected his findings.

The Catholic Church has been hit with a number of scandals in recent years. In the 1990s, revelations emerged of widespread abuse in Ireland and at the turn of the century, more cases of abuse were revealed in more than a dozen countries.

The UN has accused the Vatican of "systematically" adopting policies allowing priests to sexually abuse thousands of children.

Since his election, Pope Francis has appeared to offer new hope to victims, with a call for action on sex abuse in the Church.