The latest iteration of the Trump administration's healthcare bill has effectively collapsed, with two US Republican senators voicing opposition. 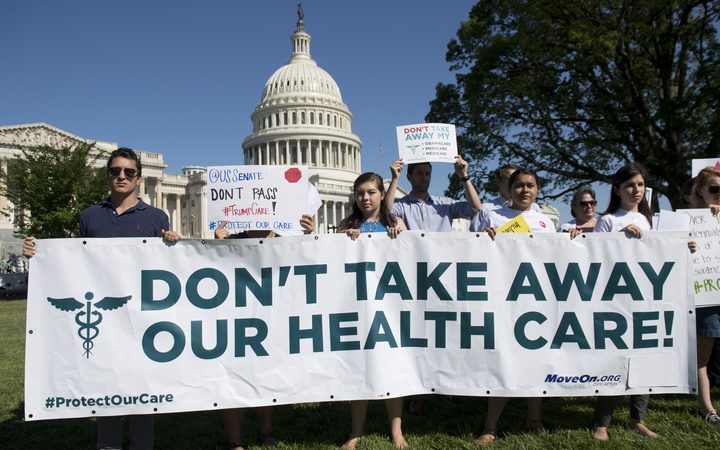 Protesters against the US Senate Republicans' healthcare bill holding a rally outside the US Capitol in June. Photo: AFP

Republican Senators Jerry Moran from Kansas and Mike Lee from Utah have now announced their opposition.

Democrats are united in opposition to the bill, meaning the bill needs the backing of at least 50 of the 52 Republicans in the 100-member Senate.

Republicans Susan Collins and Rand Paul had already said they would not vote to open debate on the legislation, and the opposition from Mr Moran and Mr Lee brings the number of Republicans opposed to four.

Mr Moran made a statement calling for a fresh start "with an open legislative process to develop innovative solutions that provide greater personal choice, protections for pre-existing conditions, increased access and lower overall costs for Kansans."

Senate Democratic leader Chuck Schumer said the Republicans should start from scratch and work with his party on healthcare legislation.

It came after Arizona senator John McCain's surgery on Saturday to remove a clot above his left eye delayed the vote.

An extended delay could endanger passage, as the Senate faces an agenda packed with other legislation and critics of the measure hope to use the delay to increase opposition to it.

Top Senate Democrats sent a letter to Republicans on Monday suggesting they hold a public hearing during the delay, saying it would allow senators to hear "unfiltered and unbiased" feedback on the bill.

The letter also requested that Republicans make a commitment not to proceed on the bill without a complete score from the Congressional Budget Office, which was initially expected to release an analysis on Monday but has delayed that report.

New York state Attorney General Eric Schneiderman has said he intended to sue the federal government if Republican lawmakers passed legislation to overhaul the US healthcare system, his office said on Monday.