A rogue Venezuelan policeman who used a stolen helicopter to fire on government buildings has remerged at an opposition vigil. 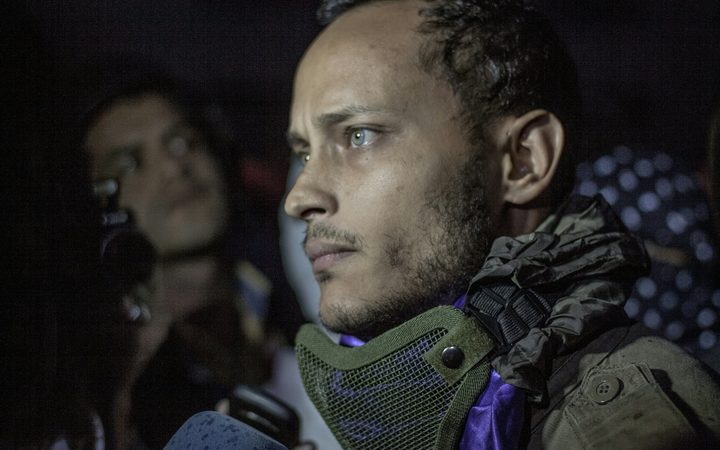 It was Oscar Pérez's first public appearance since the attack.

He has been on the run since the incident, with the government accusing him of terrorism and of working for foreign powers.

Venezuela has been shaken by often violent protests in recent months and is in economic crisis.

Video footage shows Mr Pérez, 36, in the middle of a group of masked demonstrators mourning the deaths of those killed in the demonstrations.

He called for another general strike on 18 July against the government, a date he called the "zero hour".

Mr Perez also urged Venezuelans to back a symbolic vote organised against government plans to rewrite the constitution.

During the helicopter attack several shots were fired and grenades dropped on the Supreme Court. No-one was injured.

Mr Pérez was a member of the police force for 15 years.

Colourful details have emerged about his past, including an acting role in the 2015 film, Suspended Death, which tells the story of elite police officers rescuing the victim of a kidnapping.

The crisis in Venezuela

The country is in a deep economic crisis, made worse by the falling price of oil, which accounts for about 95 percent of its export revenues and was used to finance some of the government's generous social programmes. Forced to make cuts, President Nicolas Maduro has seen his support fall among core backers.

Also, as a result of the crisis, parts of Venezuela face severe shortages of basic supplies such as medicine and food.

The opposition accuses Mr Maduro of not only mismanaging the economy but also eroding the country's democratic institutions.

In March, the Supreme Court decided it would take over the National Assembly. The decision was reversed, but Mr Maduro was accused by opponents of trying to stage a coup. That sparked almost daily protests calling for his resignation.

Meanwhile, Mr Maduro says the opposition is trying to overthrow his government illegally, and blames the country's problems on an "economic war" being waged against him.