Melbourne police say they are treating yesterday's shooting and hostage drama in the city as terrorism. 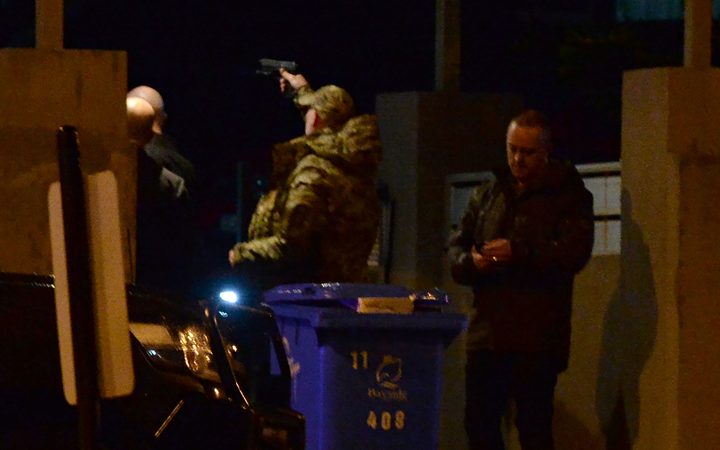 A police officer holds a gun over the front gate of a residential area in the Melbourne bayside suburb of Brighton during the siege. Photo: AFP

The Islamic State group claimed responsibility for the siege, in which a man was killed, several police were injured and a woman was held against her will.

"We are treating it as a terrorism incident," Commissioner Ashton told ABC.

The gunman was shot dead by police, ending the siege which lasted more than an hour. 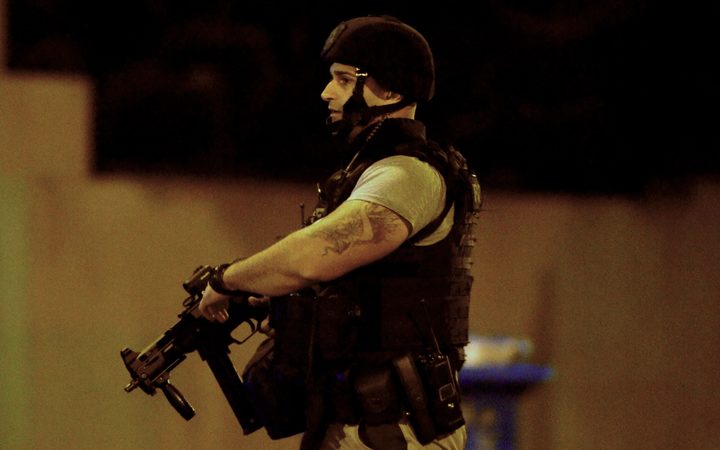 An armed police officer walks at the scene of the siege. Photo: AFP

Police said it was possible Mr Khayre, from Roxburgh Park in Melbourne's north, may have been attempting to lure police by taking an escort worker hostage.

"We still don't know exactly whether that was the case," Mr Ashton said.

"Certainly [there was] a booking made to see an escort at the premises. He's then turned up at the premises with a firearm, that's all being weighed into the calculations.

"At this stage it's just too early to know how random this was in terms of whether it was something that he was planning or thinking about, whether police were the target or he's seized the opportunity he thought was presented to him."

Corrections Victoria confirmed Mr Khayre, who had a history of drug abuse, had been fitted with an electronic monitoring device as part of his parole conditions when he was released to ensure that he kept to a 10pm curfew.

An alert that the device had been tampered with was received on Monday about 4pm, a Corrections spokesman said.

The authorities monitoring the device contacted police and the offender's parole officer.

Mr Khayre was charged and acquitted by a jury over a plot to attack the Holsworthy Army barracks in Sydney in 2009.

Three of his co-accused were found guilty of planning the terrorist attack as payback for Australia's military action in the Middle East.

Earlier, IS published a statement via its Amaq propaganda arm, which said the attack in Melbourne was carried out by one of its "soldiers".

He also killed a man working at the apartment building, who police said was an Australian citizen born in China.

Commissioner Ashton said the siege was being treated as a "terrorism incident", but warned that IS's claim was "the sort of thing they jump up and say a lot" and there was no evidence to indicate Mr Khayre was acting on a message from overseas.

"[Mr Khayre] has a long criminal history with us, but also from what we're piecing together comments he made related to ISIS and Al Qaeda certainly for us put this in the terrorism category," he said.

"We don't yet know if this was something he was really planning or whether it was just an ad hoc decision that he's made just to go off tap like this." 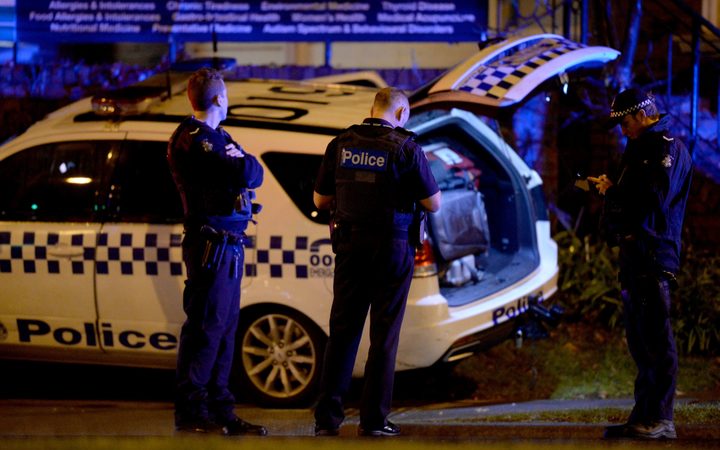 Police staying on the alert during the siege. Photo: AFP

Graeme Hisgrove, who lives next door to the serviced apartments, said police used his backyard during their operation.

"I was out in the backyard and I heard a large bang, and when I went out on the street to see what was going on, all the police were there and told us to get back in the house," he said.

"I ran back into the house and next thing the Special Operations Group turned up and went through the house and then staked out on our boundary.

"We were just in the front room of the house and all the rapid fire started, so we all hit the deck on the floor and just didn't know what was going on."

Three officers were also injured when they stormed the building.