The French policeman who was killed by a jihadist in Paris in April has been married in a posthumous ceremony with his gay partner. 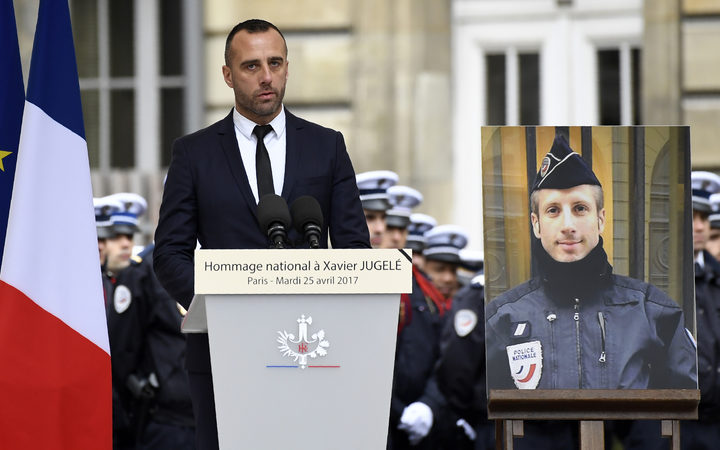 Etienne Cardiles gave a moving address at the ceremony of remembrance for his partner Xavier Jugelé. The slain officer's portrait is by his side. Photo: AFP

The wedding of the late Xavier Jugelé and Etienne Cardiles was conducted in the presence of former President Francois Hollande and Paris Mayor Anne Hidalgo.

France is one of the few countries where posthumous marriages are permitted by law.

Mr Jugelé was shot dead on 20 April while on duty on the Champs Elysees.

Two other officers were wounded in the attack - just days before the first round of the French presidential elections.

The attacker, who was later named as convicted criminal Karim Cheurfi, was shot dead by security forces. A note defending Islamic State was found near his body.

Wednesday's ceremony is believed to be the first posthumous gay wedding to take place in France, so possibly in the world, the BBC reports.

The 37-year-old police officers was an active campaigner for gay rights and was in a a civil partnership with Mr Cardiles.

His murder caused huge emotion across France, especially after the moving address by his partner at a ceremony of remembrance.

"I have no hatred, Xavier, because it is not like you and does not fit with what made your heart beat nor what made you a guardian of the peace," Mr Cardiles said.

Originally from the Loire Valley region in central France, Mr Jugelé had been serving in the capital since 2014.

He was deployed on the night of the November 2015 attacks in Paris to the Bataclan concert hall, returning the following year on the night the venue reopened.