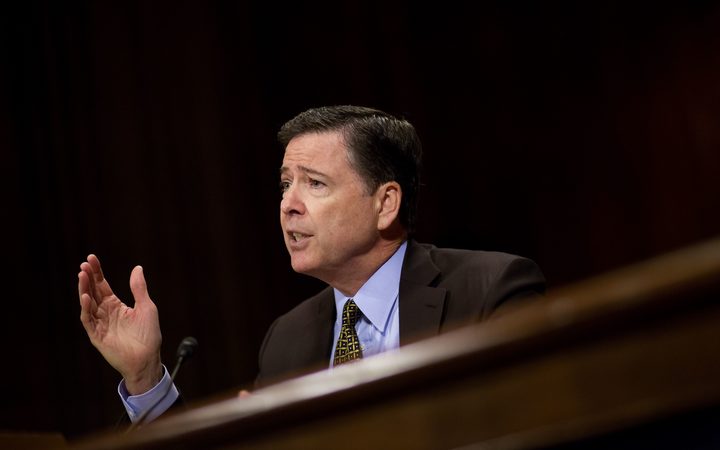 Mr Comey had been running an inquiry into possible collusion between Russia and Donald Trump's election campaign.

The White House has not disputed the language used.

The report was published just as Mr Trump took off on a flight to the Middle East for the first leg of his first foreign tour as president.

In another development, the Washington Post reported that a current White House official is a "significant person of interest" in the investigation into alleged links between the Trump campaign and Russia.

It quoted unnamed sources familiar with the investigation as saying it was someone "close to the president" but they would not identify them further. The White House has denied there was collusion between the campaign and any "foreign entity".

Donald Trump reportedly told his Russian guests that firing Mr Comey had relieved the "great pressure" his administration was under because of the Russia investigation.

"I just fired the head of the FBI. He was crazy, a real nut job," Mr Trump told the Russian officials, the Times reported.

"I faced great pressure because of Russia. That's taken off."

But, warning that leaks were undermining national security, White House Press Secretary Sean Spicer said: "By grandstanding and politicising the investigation into Russia's actions, James Comey created unnecessary pressure on our ability to engage and negotiate with Russia.

"The investigation would have always continued, and obviously, the termination of Comey would not have ended it."

The summary was drawn from a formal account of last week's meeting between Mr Trump, Russian Foreign Minister Sergei Lavrov and the Russian Ambassador Sergei Kislyak, who is at the centre of many of the controversial contacts between the Trump campaign and senior Russian officials.

Mr Trump had fired Mr Comey the evening before.